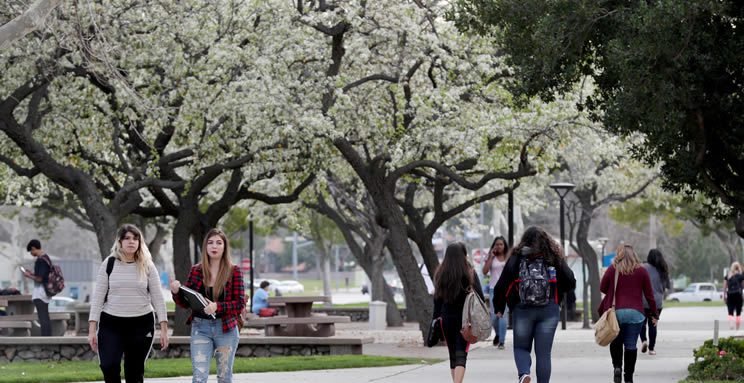 As part of the Native American Enrollment and Achievement Initiative, CSUSB will identify and hire a Director of Tribal Relations dedicated to overseeing implementation of the program. The grant will sponsor two enrollment and outreach coordinators focused on building a pipeline from all high schools statewide to CSUSB, other California State University campuses or a University of California campus; three student mentors to provide guidance to native students enrolled at CSUSB; an academic scholarship; and a summer bridge program geared toward the Native American student population.

The goal will be to increase Native American student enrollment by 50 percent.

“CSUSB’s commitment to college access extends across the Inland Empire and throughout California,” said university President Tomás D. Morales. “But we must work harder to engage and recruit disadvantaged student populations who may not have ever considered higher education part of their future. This remarkable grant strengthens our relationship with tribal communities, creating partnerships to encourage and grow Native American enrollment, not only at CSUSB, but across California.”

“The new Native American Enrollment and Achievement Initiative will expand the university’s capacity to bring Native students to CSUSB, but of equal importance, it will work to retain these students until they achieve their educational goals,” Valbuena said. “For nearly 20 years, the span of one generation, CSUSB has played host to programs that have shared the languages, culture and history of San Manuel and other native nations with school-aged children, university students and the public at large. Now we turn our attention to individual Native American students who will come to carry their own legacy forward through educational attainment.”

The San Manuel Band of Mission Indians has worked closely over the years with CSUSB to support the university. The university’s student union bears the name of Santos Manuel, a tribal leader who in 1866 led the tribe to safety from the San Bernardino Mountains to the valley to escape militia forces that killed many tribal members. The valley eventually became the San Manuel Reservation in the 1890s, which was named in Santos Manuel’s honor; the tribe was recognized as the San Manuel Band of Mission Indians.

As a Minority Serving Institution and a Hispanic-Serving Institution, CSUSB has continued to identify better ways to reach out to and support underrepresented student populations. This past academic year, the university created the Native American Task Force, which has met three times since May, in order to look at the issues of access and support while enrolled to promote graduation of Native students.

“These young people are key to the future of their families, their communities, and to the Inland Empire,” Morales said. “We are so thankful for our relationship with Chairwoman Valbuena and the entire San Manuel family as we work together to impact future generations of students and their families.”

California State University, San Bernardino is a preeminent center of intellectual and cultural activity in Inland Southern California. Opened in 1965 and set at the foothills of the beautiful San Bernardino Mountains, the university serves more than 20,000 students each year and graduates about 4,000 students annually. The university offers more than 70 traditional baccalaureate and master’s degree programs, education credential and certificate programs, and a doctorate program in educational leadership. Every one of its academic programs that is eligible has earned national accreditation. CSUSB reflects the dynamic diversity of the region and has the most diverse student population of any university in the Inland Empire. More than 80 percent of those who graduate are the first in their families to do so