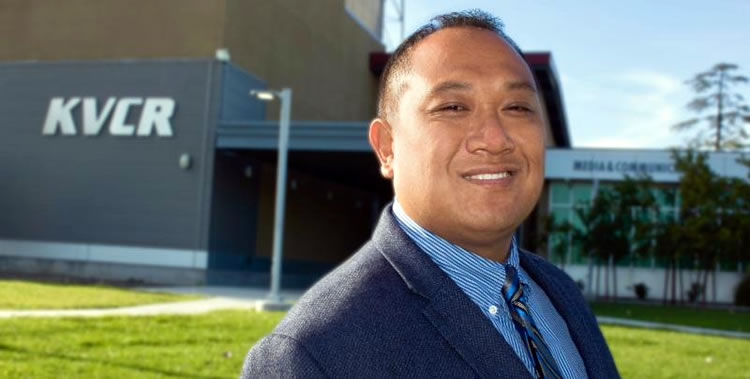 The post at KVCR represents something of a homecoming for Lágrimas — he graduated from Aquinas High School in San Bernardino before going to UCLA and working for CBS Television, Metro-Goldwyn-Mayer, The Disney Channel and ABC Studios as a financial and research specialist. Lágrimas produced the film, “They’re Watching” streaming now on Netflix, and served on the board of directors of SBCCD’s Economic Development & Corporate Training Foundation, which brings together business, education and civic leaders to help students of all ages gain new skills to re-enter the workforce.

“We are delighted to welcome Mark, whose deep roots in our region and the entertainment industry will help us bolster KVCR’s ability to deliver the world-class programming that Inland Southern California deserves,” said Bruce Baron, Chancellor of the San Bernardino Community College District, which includes San Bernardino Valley College and Crafton Hills College in Yucaipa. SBCCD holds the broadcast license for KVCR – the PBS and NPR affiliate station for Inland Southern California.

“Having the opportunity to help shape the future of KVCR and uplift our region through rich and innovative programming is a privilege and honor,” said Lágrimas.“As the traditional ways of broadcasting are rapidly evolving, I’m committed to advance KVCR’s storied legacy and educational mission by creating new partnerships, both regionally and nationwide, and bringing cutting edge media strategies to ensure KVCR’s continued success and relevance into the future.”

Lágrimas joined KVCR on February 24 and will serve a one-year contract. He is filling the void left by Alfredo Cruz, who has taken a leave of absence to focus on his health.

Lágrimas will manage all aspects of the station’s public television and radio programming on Channel 24 and 91.9 FM, respectively. He will also oversee First Nations Experience (FNX), the first and only nationally distributed TV channel exclusively devoted to Native American and World Indigenous content, created in partnership between KVCR and the San Manuel Band of Mission Indians.

We serve 22 cities in the heart of Inland Southern California and create new opportunities for 25,000 students each year through our two fully-accredited campuses: Crafton Hills College and San Bernardino Valley College. We cultivate minds and transform our community through our Economic Development & Corporate Training division and KVCR, the region’s National Public Radio (NPR) and Public Broadcasting System (PBS) television station affiliate. Through our day-to-day educational enterprise, SBCCD generates $621 million in local economic activity each year. Learn more at www.sbccd.edu or watch our video.