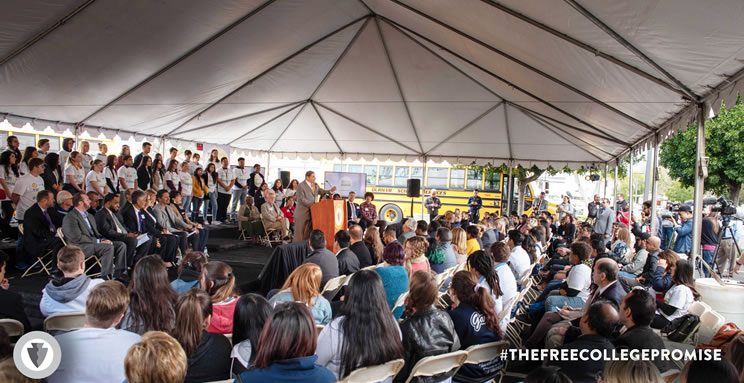 San Bernardino, CA – On March 8th, San Bernardino Community College District officials announced The Free College Promise; two years of free college, free textbooks, plus each participant receives $300 cash and the use of a laptop. “There is no GPA requirement and no essay,” said SBCCD Chancellor Bruce Baron. This is the first self-funded two-year free college promise initiative in Inland Southern California.

The mention of textbooks caught the eye of Destinee Chavez, 19, from Carter High School in Rialto. “Even for a used one it can cost $120,” she said. Chavez, who wants to be a nurse, was one of a sea of high school students wearing a free t-shirt and cheering for the formal launch of the new program.

The Free College Promise will start this fall with 1,000 high school graduates of the class of 2019 from Bear Valley Unified, Colton Joint Unified, Redlands Unified, Rialto Unified, Rim of the World Unified, San Bernardino City Unified and Yucaipa-Calimesa Unified. To be eligible, students must fill out the California Community College application, fill out the Free Application for Federal Student Aid (FAFSA) or California Dream Act application by August 1, 2019, and take a full course load each semester.

The launch included lunch, information and lots of cheering under dappled sunlight in an outdoor ceremony near the solar panels at the community college district headquarters. On the speaker’s platform, lots of lawmakers, school superintendents, college trustees, and other officials.

“This community is key to the future of California,” said Eloy Ortiz Oakley, chancellor of the 115-campus California Community Colleges system. He grew up in a working-class Los Angeles neighborhood, spent four years in the military and made his way eventually to a community college and then a UC campus. He recalled that his high school counselor never thought he was university material.

To boost educational attainment, in October the SBCCD board of trustees set aside $10 million in seed money to help launch The Free College Promise through donations and funding it received from a recent Federal Communications Commission’s spectrum auction.

Chancellor Baron said, “When students don’t worry about money, and they have an umbrella of support, they perform better academically.” The college district has programs in place to offer extra preparation during the summer or paid internships to get ready for future employment, through a partnership with the San Bernardino County Workforce Development Board.

“Come to college, and we will pay for it,” said Assemblywoman Eloise Gomez Reyes, who was born and raised in Colton. She said she started her college at San Bernardino Valley College and then she went to USC and Loyola Law School.

“It is critically important that our community colleges remain an affordable option for all students,” she said. “When non-tuition costs like housing, food, and textbooks are considered, community college is often more expensive for our lowest-income students to attend than other state universities.”

Leyva recently introduced Senate Bill 291 to establish a new financial aid program which helps cover a community college student’s whole cost of attendance. “I might need some of you to come up to Sacramento and testify,” she said.

The Free College Promise seemed quite attractive to the assembled high school students.

Daniela Lozano, 18, is finishing her senior year at Bloomington High School. She thought she would attend Cal State San Bernardino to study to be a therapist for children. But now she thinks it might make more economic sense to start at San Bernardino Valley College or Crafton Hills College and then transfer. Her mother agrees. “She wants me to not be in debt,” said Lozano.

For 18-year-old Brandom Lee, The Free College Promise is a great new option. A senior at San Gorgonio High School in San Bernardino, he has applied to several four-year colleges. UC San Diego is his top choice, but he hasn’t heard back yet. His grandfather, Robert Lee, worked as a robotics engineer at NASA and Brandom Lee said he wants to follow that family tradition and go into aerospace.

Bryan Cruz, 17, said when he finishes his senior year at Milor High School in Rialto he will likely attend San Bernardino Valley College to prepare to be a news anchor. After his first two years, he wants to head to New York University, where his sister is a student.

At the end of the ceremony Chancellor Baron asked all the students to raise their right hand and make a pledge:

I promise that after high school, I will go to college.

I promise that I will never give up on myself or my dreams.

I promise that I will be the one who makes a difference – for me, for my family and for my community.