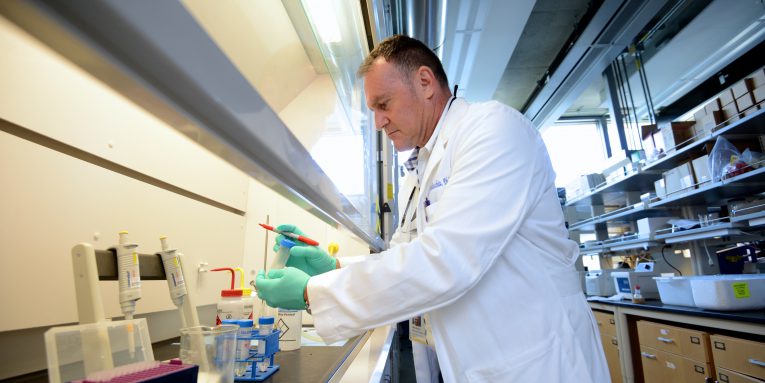 Riverside, CA. – Maurizio Pellecchia, who holds the Daniel Hays Chair in Cancer Research at the University of California, Riverside, has received two grants to continue his research aimed at finding therapeutics for cancer, amyotrophic lateral sclerosis (ALS), and other neurodegenerative diseases.

An announcement of funding opportunities in a newsletter issued by the UCR Office of Research and Economic Development caught Pellecchia’s attention and led him to apply for the NASEM grant. The selection process was highly competitive: only 15 applications, or 12 percent of all proposals, received funding after being evaluated independently by Egyptian and U.S. reviewers.

The research will focus on the receptor EphA3 (ephrin type-A receptor 3), which plays a key role in cell proliferation in cancer. A receptor is a specialized cell or a group of cells that translates stimulus into nerve impulses.

“We have extensive experience with targeting the EphA2 and EphA4 receptors, with demonstrated ability in using receptor-binding agents for the targeted delivery of drugs to treat prostate cancer, melanoma, renal carcinomas, breast cancer, and leukemia,” said Pellecchia, a professor of biomedical sciences at UCR’s School of Medicine. “No such agents, however, are currently available that target the EphA3 receptor.”

Pellecchia will collaborate with Heba F. Salem, a professor of pharmaceutics and drug delivery, and the dean of the faculty of pharmacy at Egypt’s Beni-Suef University, who has extensive experience in developing shell-enriched nanoparticles as carriers for drug delivery. Salem has received similar funding from NASEM for the project.

“We are confident that this unique collaborative effort is likely to result in innovative agents that would not only support further cellular and mechanistic studies aimed at validating the EphA3 receptor as a target, but that could also be translated into novel and effective therapeutics for the treatment of melanoma, leukemia, and potentially other tumors,” said Pellecchia, who serves as the founding director of the Center for Molecular and Translational Medicine at UCR.

The NIH/NINDS grant will focus on understanding the detailed mechanism of the EphA4 receptor and how inhibiting it with an agonistic agent could delay the progression of motor neuron diseases such as ALS, also known as Lou Gehrig’s disease, as well as Parkinson’s disease and gastric cancer.

“Questions we hope to answer are: Can we understand at the mechanistic level how EphA4 modulates ALS and other motor neuron diseases, and can we further improve or derive new agents that can prevent these diseases?” Pellecchia said.

In this research, Pellecchia will collaborate with Iryna Ethell, a professor of biomedical sciences at UCR who studies astrocytes, which are cells found abundantly in the central nervous system. He will also collaborate with Kathrin Meyer of the Nationwide Children’s Hospital in Columbus, Ohio, who has a specific assay and tissue bank of astrocytes and motor neurons derived directly from healthy persons and from patients with ALS. A few years ago, Meyer discovered that when astrocytes and motor neurons from a patient with ALS are co-cultured, the astrocytes kill the motor neurons.

Pellecchia is the scientific founder and a consultant for Iron Horse Therapeutics in San Diego, a biotechnology company focused on developing ALS treatments.