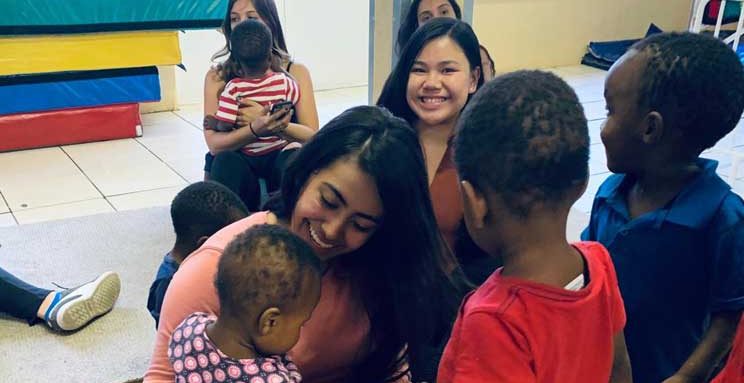 San Bernardino, CA – A visit to an orphanage in Soweto became the emotional highlight of a study abroad trip to South Africa this summer by a group of Cal State San Bernardino students and their faculty adviser.

With funds donated by CSUSB President Tomás D. Morales and faculty and staff of the university’s Department of Psychology, students and the community, the delegation of 14 students was able to purchase $2,000 worth of diapers, wipes and space heaters – items the Othandweni Family Care Centre was in desperate need of, said Kelly Campbell, the faculty adviser on the trip and a CSUSB professor of psychology. It was the second consecutive year that CSUSB students were able to assist the center; students led by Tiffany Jones, chair of the Department of History, donated need supplies there.

According to Jo’burg Child Welfare, a nonprofit organization that oversees the Othandweni Family Care Centre, the orphanage was established in 1984 to provide residential care for children who have been abused, abandoned or neglected – including AIDS orphans and HIV-positive babies in need of shelter and special care. The center is located in Soweto Township in Johannesburg, South Africa.

The center’s staff told Campbell that the supplies had arrived just in time, especially the space heaters because it is now winter in South Africa.

The visit was more than dropping off the supplies, however.

“We interacted with the babies and children and all were deeply touched by the visit,” Campbell said. “One student said she wrote 10 pages about it in her study abroad journal. As soon as we walked in, the children ran to us, they wanted to hug us and play games immediately. When I tried to put my child down so that I could take a photo with the caretaker, she gripped her legs around my waist so tightly that I couldn’t put her down.

“The children are desperately in need of attention and affection,” Campbell said. “It was an emotional day, heartbreaking and uplifting at the same time – and something we will never forget.”

The students’ stay coincided with Mandela Day, officially on July 18, but South Africans celebrate his legacy and calls for action in the weeks before and thereafter. Nelson Mandela, the South African leader who passed away in 2013, regularly celebrated his birthday by giving gifts to underprivileged children.

“Unfortunately, there are many orphans in South Africa due to the high rates of HIV/AIDS that leave children without parents,” Campbell said. And exacerbating the situation is that the Othandweni Family Care Centre and HIV/AIDS wellness center the students also visited are badly underfunded to carry out their work.

In addition to those visits, the students had the opportunity to learn about the history of South Africa, its current political and social environment and what makes the country unique, and attend classes at the University of Cape Town. And there were visits to sites such as the home of the late Nelson Mandela, Robben Island (where Mandela and others were held as political prisoners) and other points of interest.