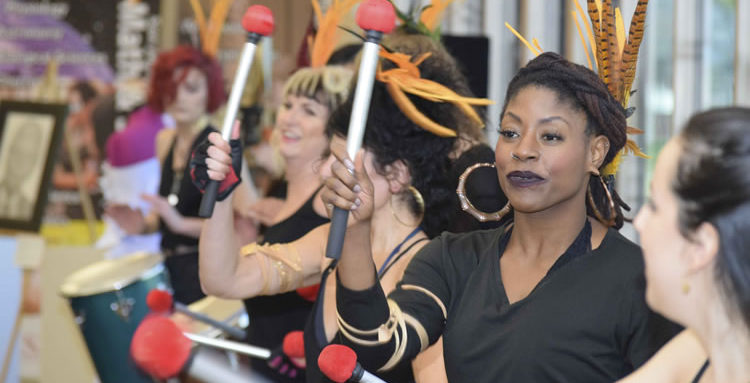 San Jacinto, CA – “Continuing The Dream: The Struggle For Social Justice” was the program title for the 11th annual Martin Luther King Unity Breakfast event at the Mt. San Jacinto College. Held at the San Jacinto Campus, this event brought a heartfelt community of people together to enjoy dance, music performances, speaker presentations, an art contest and breakfast.

“I just wanted to display what was going on in the world today because I feel that every life matters whether you be homeless or not” said Trejo, 29, of Yucca Valley.

Second place went to Kyle Nguyen for his fashion piece “Dance of Peace.”

Professor Franklin Perez presented “Still We Rise: A Need For Complex, Interconnected, and Direct Political Expressions and Movements in the Trump Era.”

Franklin left the audience with this thought: “What is your dream and let’s make it happen!”

MSJC student Kimberly Sawyer gave her speech “Conformity and Social Change.” She expressed the importance understanding our own uniqueness while simultaneously responding to and embracing our current social communities.

The event included other speakers and performances by the Homeland First Church of God choir and Julie Simon’s Tropicaleiza and Afro-Samba Mama Bateria African  Drummers.

Mt. San Jacinto College Diversity Committee gave a special thanks to the MSJC Board of Trustees and President/Superintendent Roger Schultz for their continued support and participation.