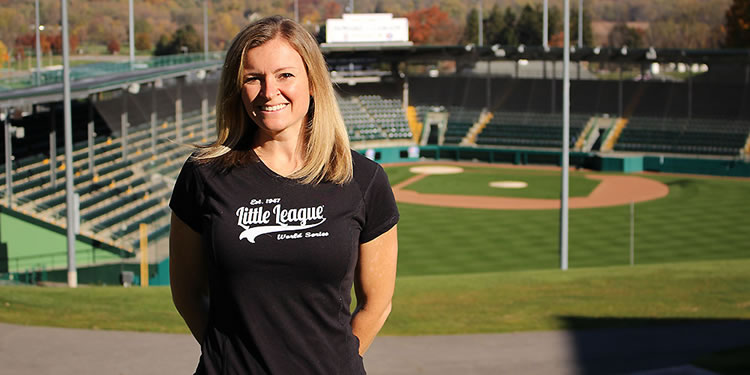 San Bernardino, CA – Little League® International is pleased to announce that April Meehleder has officially been named the new Little League Western Region Director. Ms. Meehleder, who has served as the Assistant Region Director since November 2016, takes over as Director following the retirement of Dave Bonham after 36 years of service to Little League.

“It is truly an honor and a wonderful opportunity to be named the Western Region Director,” said Ms. Meehleder. “I am excited to work with such a dedicated and passionate group of volunteers in the West Region and I know we have a great future ahead of us.”

Prior to heading out to San Bernardino as the Assistant Region Director, Ms. Meehleder worked at Little League International Headquarters in South Williamsport, Pa., as a League Development Assistant Manager since June 2015 where she has helped expand Little League Baseball®, Little League Softball®, and the Little League Challenger Division® through efforts across the nation. As part of her work, Ms. Meehleder assisted in the on-boarding and chartering process for all new leagues in the United States, established new league best practices through work with current leagues, and helped develop Tee Ball training videos in coordination with local Tee Ball programs.

“April’s experience working alongside Dave in San Bernardino, combined with her time spent at Little League Headquarters in Williamsport and dedication to the Little League program, has provided her with the knowledge and skills necessary to serve as a leader for the entire West Region,” said Stephen D. Keener, Little League President and CEO. “We have the utmost confidence in April and are looking forward to the future of the West Region under her direction.”

A 2006 graduate of Eastern Michigan University with a Bachelor of Arts in Public Relations, Ms. Meehleder has also served as a customer service representative for Historic Square Agency (Erie, Pa.) from 2013-15, was the Executive Vice President of Business Development for Blue Vase Consulting and Learnscape GED (Camp Hill, Pa.) from 2010-13, was a Facility and Operations Executive Group Leader for the Target Distribution Center (Chambersburg, Pa.) from 2008-10, and served as a team leader for the AmeriCorps National Civilian Community Corps (Perry Point, Md.) in 2007.

With the new position filled, Little League International will begin its search for a new Assistant Western Region Director. Applicants interested in the position should visit LittleLeague.org.