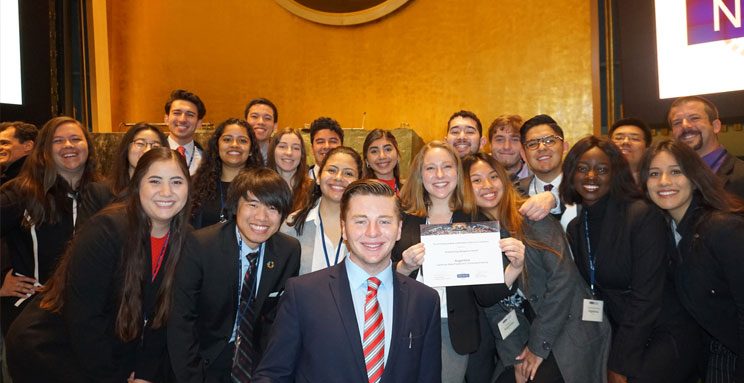 Pomona, CA – They prepared. They collaborated. They negotiated.

And at the close of the Model United Nations conference, held April 14-19 in New York City, Cal Poly Pomona’s team came away with the Outstanding Delegation award – the competition’s top prize.

In addition to the overall award, four students earned individual honors and the 2019 team tied the 2015 squad for most decorated team since the program was launched in 1977.

The Cal Poly Pomona team of 20 students from diverse majors competed against around 170 participating universities and colleges around the world. The students began preparing in January to play the role of Argentina at the conference.

In addition to Outstanding Delegation, Andrea Blockinger, an anthropology student, and Kendall Haun, who is studying political science, were named Outstanding Delegates in Committee for their work on the competition’s Environment Assembly. Andrew Hwang, a political science student, and Arely Solis, who is studying history, received Outstanding Position Paper honors for a paper they wrote for the High Commissioner of Refugees.

The idea is to emulate the United Nations general assembly, with students playing the part of actual diplomats and taking the position on issues that the country they represent would take, Scarcelli said. Students serve on committees, write resolutions with students on other teams, and try to get students to co-sponsor their resolution and vote for it. The students also were able to meet with a diplomat from Argentina at the conference and get input and advice.

Although it is a competition, the event takes on a different tenor that most.

“It’s a bit like a debate team but instead of trying to beat the other team, you’re trying to be the best cooperator,” he said. “We are scored on how well we negotiate and cooperate with other teams.”

Jordan Dayer, one of the team’s head delegates, said participating in Model UN is a great bonding experience.

“I love the people in the program,” said the junior political science major. “I think that it is a great unifier. We have a very diverse team, and that is one of our strengths. We strive to be one team.”

Dayer was studying kinesiology, with thoughts on becoming a doctor, but her experience with Model UN changed the now aspiring human rights attorney’s career trajectory, she said explain the program’s impact.

When the team found out they won Outstanding Delegation, Dayer said the decorum reserved for the competition gave way to cheers.

“Everyone was screaming,” she said. “There was a lot of hugging and jumping….It was definitely a moment of pride and excitement.”

“I am super proud of them,” said Political Science Professor Marc Scarcelli, the team’s faculty advisor. “They work so hard on all of the preparation for several months before we went. The class is Tuesday and Thursday from 5 to 7 p.m., but they work hours beyond that. It’s really an enormous effort on their part.”