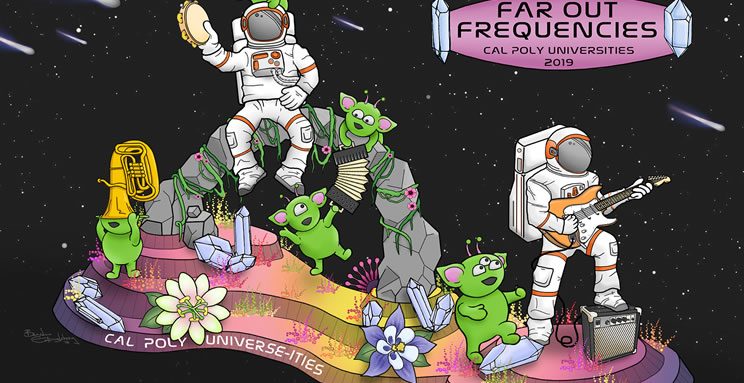 At the front of the float, Morgan, a 12-foot tall astronaut, will play an electric guitar while his new friend, the alien Ketchup, plays air guitar. The space concert also includes Astronaut Sally on tambourine, two aliens on accordion, a saxophone player and Tuba Head, a little alien whose head is stuck in the instrument. The design was one of more than 100 entries submitted to the Cal Poly team.

The Cal Poly float is the only student-designed and built entry in the Rose Parade. A joint effort by students at Cal Poly Pomona and Cal Poly San Luis Obispo since 1949, the team has won 58 awards including the 2018 Past President award honoring the most outstanding innovation in the use of floral and non-floral materials.

Animation on the 2019 float includes the guitar-playing duo, astronaut Sally playing the tambourine and moving eyes and arms on some of the aliens. LED lights will add sparkle to the planet’s crystal formations and the guitar amp.

The Rose Float team is already at work building the float. Senior Naythan Muro, the design chair, has been building and shaping the front half of the float’s base.

“We call this piece pod. The best part is making sure that this body is safe for others to stand and walk around on when decorating our float in the future. As a civil engineer major, I can [use] what I have learned in classes so far into making sure that pod is structurally sound and of course safe. As we progress, I will be working on the shape of our rock formation that [supports] astronaut Sally.”

“When you combine my fascination with space and astronauts with a classic rock and roll guitar, you get my favorite element on Cal Poly Rose Float’s float, Morgan. He’s in a full rock mode position with his left leg resting on his amp playing his guitar for the aliens that he’s discovered.”

Cal Poly Pomona has traditionally built the front half of the pod, while students at Cal Poly SLO build the back. Design elements are shaped by both teams, who join the two halves at Pomona later in the fall. When complete, the float will be 48 feet long, 23 feet high and 18 feet wide.

The 130th Rose Parade, with the theme “The Melody of Life,” will be held in Pasadena on Tuesday, January 1, 2019 and televised to millions of people around the world. Thousands will line the parade route.