SAN BERNARDINO, Calif. — A study on the sociological effects of homeownership in California by two faculty members of the Cal State San Bernardino Department of Economics has been given a top prize by a national homebuilders group. 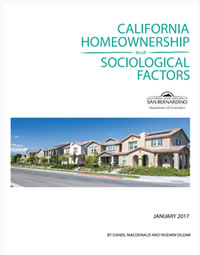 “California Homeownership and Sociological Factors,” written by Daniel MacDonald and Yasemin Dildar, assistant professors of economics, was awarded the 2017 Best Local Government Affairs Effort in the Government Affairs category by the National Association for Home Builders. The winning study, which was among 120 entries nationwide, was commissioned by the Building Industry Association of Southern California, Baldy View Chapter. The award was given to the BIA chapter’s leadership, including CEO Carlos Rodriguez, for their efforts in funding and disseminating the study as part of their advocacy.

“Recent initiatives for more funding or to loosen supply restrictions at the state and local levels (such as SB-827) are fueled by a need to solve the social problems generated by declining homeownership rates in California,” MacDonald and Dildar said. “Because of our research findings, anti-development interest groups like NIMBYs (‘Not In My Back Yard’) are being increasingly forced to defend a position that is at odds with a vibrant and safe community.”

The report, published in 2017, took data on homeownership from each county in California and analyzed its relationship to sociological outcomes such as health, educational attainment, inequality, crime and poverty. It found that, on average, and after accounting for other factors such as unemployment and demographics (minority population size, age distribution, and family structure), counties with higher homeownership rates have significantly higher high school graduation rates, lower crime rates (both violent and property crime), and reduced poverty rates.

It also found that the positive relationships between high school graduation rates and homeownership are stronger for minority groups (Hispanics/Latinos and African-Americans), lending weight to the claim that increased homeownership among minority groups can help narrow socioeconomic disparities and improve economic opportunities.