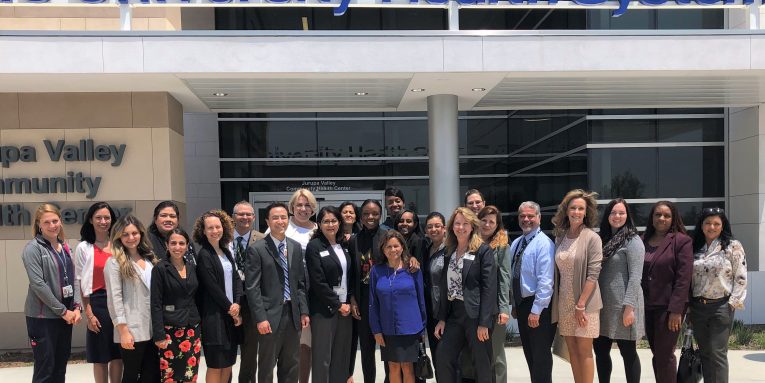 Dr. Burke Harris began her statewide tour shortly after being appointed by Gov. Gavin Newsom in January to serve as California’s first surgeon general. Dr. Burke Harris has travelled the state listening to the unique challenges that communities in each region face when addressing the root causes of serious health conditions and health disparities.

Bringing together community members, healthcare providers, and leaders to roundtables across the state, Dr. Burke Harris has heard how the Office of the Surgeon General can support communities with prevention and treatment.

“I’m here to listen, and I’m here to serve,” said Dr. Burke Harris, who was joined by First 5 Riverside and San Bernardino leadership during her nearly 90-minute roundtable with health and mental health clinicians, social services providers and experts in early childhood development.  “We want to address root causes of serious health conditions and disparities.”

About one in five Riverside County households is suffering from adverse experiences that are associated with long-term health and mental health conditions. Dr. Burke Harris said she was encouraged to see stakeholders from the state’s fourth most populous county pulling together to counter a public health crisis. In relation to overall health factors, Riverside County ranks 39th among California’s 58 counties while approximately one of every three households in Riverside County has a child under age 7.

“We know the physical and emotional well-being of children is largely dependent on the strength, health and resilience of the family, said Tammi Graham, director of First Five Riverside.

Kim Saruwatari, director of RUHS Public Health, said her department is collaborating with stakeholders across Riverside County to address adverse childhood experiences through the Riverside Resilience Initiative. The project is aimed at improving health and educational outcomes for children through age 17 during the next decade.

“This is a conversation that we definitely plan to continue as we work with our stakeholders locally and statewide to set a new course for the future of children and families,” Saruwatari said. “We are helping children and families build resiliency while working on solutions that lead to prevention.”