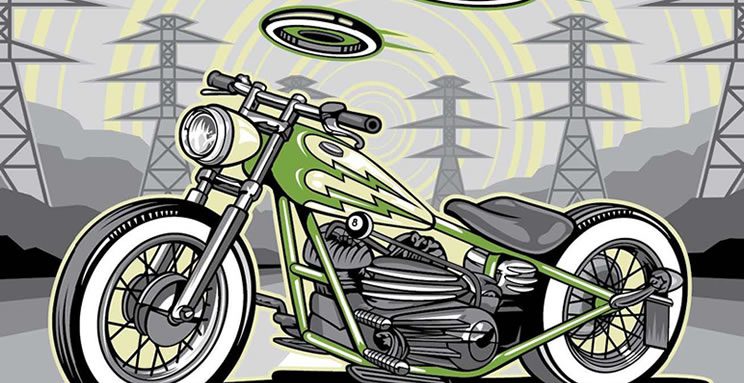 Rancho Cucamonga, Ca – Chaffey College will soon be home to more than 40 works of art that pay homage to the gleaming chrome, smooth leather and thundering engines of the motorcycle.

“Faster, Faster! The Art of Motorcycle Culture” opens Jan. 22 and runs through March 9 in the Wignall Museum of Contemporary Art. It is Chaffey’s first exhibition in the newly-remodeled facility. The event is free and open to the public.

Rebecca Trawick, museum director and curator, said the exhibition holds significance in the region because of the popularity of its subject.

“The artists included in “Faster, Faster!” explore the motorcycle and the rider in really distinctive and compelling ways. Many of the artists ride themselves, making the theme a reflection of their own dedication and love of the sport,” Trawick said.

The artists come from around the world, with several hailing from Southern California.

Riverside artist and car builder Max Grundy contributed “Patrolled by Aircraft” – a 2012 enamel painting of a motorcycle on aluminum paneling (image above).

“My compositions contain scenarios that are rendered in a style reminiscent of propaganda art – specifically, Russian World War II propaganda art. I have always admired their use of unusual perspective, a limited color palette, and dramatic text and design for maximum effect,” he said.

“Faster, Faster!” also includes a series of tintype photographs– a mid-19th century medium that involves developing a photographic image onto a metal sheet. “Kristen with her Triumph Bonneville,” by Portugal-based photographer Susana Rico, is a piece from the artist’s series on female bikers.

“I’ve specifically chosen the tintype medium for its timeless quality, to execute a series of portraits that epitomize the toughness and tenacity of these defiant women,” Rico said.

What: “Faster, Faster! The Art of Motorcycle Culture” – an exhibition of more than 40 works of motorcycle art.

When: The Wignall Museum is open from 10 a.m. to 4 p.m. Monday through Thursday and noon to 4 p.m. on Saturday. An artist’s reception will be from 4 to 6 p.m. on March 5. Additional events include a double-feature film screening in February and artist talks.