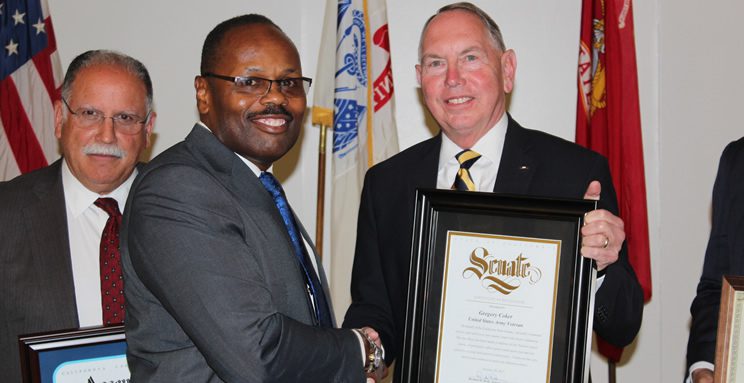 SAN BERNARDINO, Calif. – A Cal State San Bernardino graduate has been honored by state Sen. Richard D. Roth (D-Riverside) for his work in developing a program to assist military veterans in the Inland Empire.

Gregory R. Coker, who completed his master’s degree in rehabilitative counseling and is the founder and CEO of the Reaching New Heights F­­oundation Inc. based in Riverside, was one of the people honored by Roth’s Veterans Recognition Program in October.

“I am humbled and honored to be recognized by our elected state representative. It shows that he is focused on things that help veterans,” Coker said.

Roth, who retired from the U.S. Air Force in 2007 at the rank of major general, uses the Veterans Recognition Program to honor military veterans for both their military service as well as their contributions to civilian society. Many veterans have become fully integrated into their communities and are an integral part of every profession imaginable.

Coker himself is a veteran who retired at the rank of sergeant major from the U.S. Army and Army Reserves after serving 26 years. He established Reaching New Heights in September 2013 to help Inland Empire veterans who face challenges of varying degrees.

“Reaching New Heights is committed to helping Inland Empire’s veterans and their family transition from active duty, in crisis or homelessness towards stability,” Coker said. “Through collaboration, RNHFI is able to deliver a comprehensive care plan to improve the quality of life for veterans.”

According to the nonprofit group’s Facebook page, “We provide housing, resources, and career development workshops to help veterans take their first step or final step in making their dreams a reality. By collaborating and building new partnerships with other organizations and individuals, we can provide customized services and assistance in improving the quality of life of veterans by:

Coker said, “I take some of my greatest insights from General Colin Powell’s book, ‘It Worked for Me in Life and Leadership,’ rule 13: ‘Perpetual Optimism is a force multiplier.’”

For more information on the foundation, visit the Reaching New Heights Foundation Inc.’s website at http://reachingnewheightsfoundation.com.