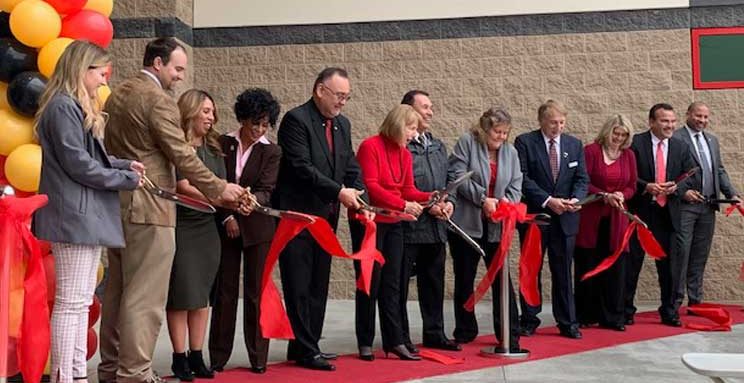 Rancho Cucamonga, CA – Dr. Mathew Holton will never forget his visit to Etiwanda High School after becoming superintendent of the Chaffey Joint Union High School District in 2008. The school had been built 25 years earlier, during difficult financial times, and was so lacking in amenities and space that it appeared to have cornered the market on mobile classrooms.

Teachers and staff had one request.

“This school was built on bare bones, and they wanted it to be a little more equitable with the others in our district. Who could blame them? But I remember walking out and thinking, ‘How are we ever going to get this done?’” Holton said. “It has obviously come a long way.”

Students, teachers, District officials and dignitaries got a first-hand view of Etiwanda’s physical transformation during dedication ceremonies for the school’s new 103,193-square-foot auditorium and classroom facility – the largest single building in the Chaffey District, capable of accommodating as many as 1,5000-2,000 students at once.

The new building was paid for through Measure P, the $848 million bond issue approved by voters in 2012 to fund capital improvements at each of the District’s high schools. Tuesday’s dedication came three years after Etiwanda opened its new stadium, also funded through Measure P.

“I think about what this building represents. It’s a statement and a symbolic representation of our deepest held beliefs that we value, above all else, equality of opportunity through education,” said John Rhinehart, President of the Chaffey District Board of Trustees. “This is a commitment to our children – to their future and the hope and the love that we bear for them.”

The state-of-the-art building sits on 2 ½ acres and is essentially the size of an entire junior high school under one roof. It features 50 classrooms in four separate wings – including five science labs and classrooms for general instruction, world languages and the arts – all flanking an 800-seat auditorium.

San Bernardino County Supervisor Janice Rutherford, who once served on the Chaffey District board as a student representative, said she remembers the desolation – and heavy winds – of Etiwanda back in the day.

“Oh my gosh, to be back here now and to look at the beauty of this campus and the modernity of the buildings,” she said. “I am proud of this community and this board for providing this amazing facility, and it is going to be wonderful to see these students thrive in the facilities you’ve provided.”