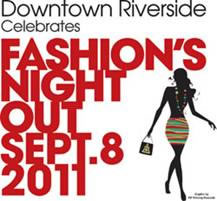 RIVERSIDE, CALIF. — August 4, 2011 — Fashion’s Night Out (FNO) is a fashion and shopping extravaganza event that was first launched in New York three years ago and has since expanded to include: Los Angeles, Atlanta, Houston, Milan, Paris, London, Lisbon and now historic downtown Riverside joins the list of participating cities. FNO — collaboration between American Vogue, the Council of Fashion Designers of America, NYC & Company, and the City of New York, and participating cities — is intended to restore consumer confidence, boost the industry’s economy and put the ‘fun’ back in shopping.

Downtown Riverside Celebrates FNO takes place Thursday, September 8th and is expected to draw thousands of fashionistas from all over the Inland region to celebrate the art of fashion and enjoy the unique shopping experience of downtown Riverside. An array of various activities include specials at local businesses, in-store retail promotions, entertainment, meet and greet of local fashion designers, product sampling, demonstrations, drawings, special guest appearances and more. Pop in and out of downtown boutiques, salons, and spas for exciting specials, beauty makeovers, how-to’s and photo ops with models from 4 to 9 p.m.Main Street Fashion Show, produced by The Art Institute of California-Inland Empire, will take place in the Civic Plaza block on Main between University and Mission Inn showcasing the latest fashion trends from 6-7 p.m. Also, check out Fashion Alley in the Culver ArtsBlock on Main Street at Ninth and browse vendors with fashion merchandise such as handmade jewelry, artisan items, apparel, shoes and more.

FNO Downtown Riverside is hosted by Riverside Downtown Partnership in partnership with The Art Institute of California-Inland Empire. For more information contact Natasha Ferguson at 951.341.6550 or Phyllis Clark at951.288.4375. Also, visit www.RiversideDowntown.org or find us on social network sites: www.facebook.com/fashionsnightoutdowntownriverside and www.twitter.com/fnodowntownriv.

About Fashion’s Night Out

Fashion’s Night Out (FNO) is an unprecedented global initiative originally created in 2009 to celebrate fashion, restore consumer confidence, and boost the industry’s economy during the recession. On September 8, 2011, in response to overwhelming demand, Fashion’s Night Out will return to New York City and over 100 cities nationwide to highlight fashion and support retail with exciting events that include designer appearances, celebrity guests, fashion shows and musical performances. In the United States, the program is a collaboration between American Vogue, the Council of Fashion Designers of America, NYC & Company, and the City of New York. For more information visit www.fashionsnightout.com, or join us on Facebook and Twitter (@fnonyc, #FNO)