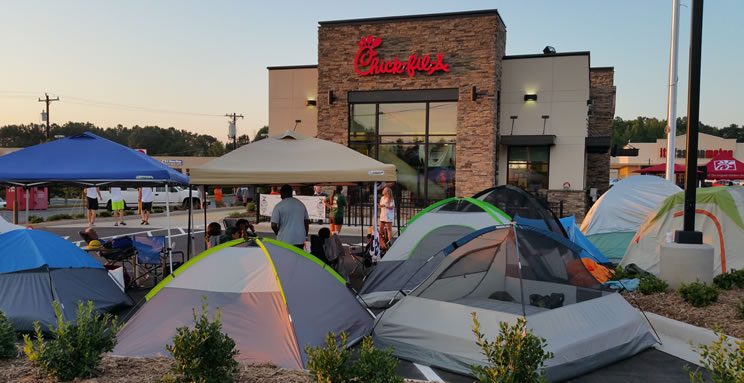 The Newest Chick-fil-A Opening in Riverside on Jan. 10

Local franchise owner and Operator Justin Beard is inviting residents to join in the opening festivities at his new restaurant at 3640 Central Ave. by participating in a community celebration that has been a 15-year Chick-fil-A tradition. Chick-fil-A’s First 100 celebration will have given away almost $39 million through year end 2018.

“I am excited to bring Chick-fil-A to even more people in Riverside and have an opportunity to mentor those who are part of our community family,” said Beard. “I am committed to developing my Team Members as together we provide a remarkable experience to our guests.”

The new Central Avenue & Riverside Plaza restaurant is part of a record week of openings for Chick-fil-A with the chain opening eight additional franchise locations around the country.

The family friendly overnight First 100 Campout party includes fun, engaging activities for all ages while enjoying Chick-fil-A meals throughout the countdown to the opening. Registration begins in the restaurant parking lot at 6 a.m., Jan. 9. Details include:

Beard began his Chick-fil-A career at 17 when a high school friend told him how much she loved working there and shortly thereafter he was hired at a Texas location. While studying psychology at Texas A&M, Beard went home one weekend and while visiting his Chick-fil-A restaurant there, had a chance meeting with Dan Cathy, son of Chick-fil-A Founder S. Truett Cathy. Watching the way Cathy interacted with Team Members fueled Beard’s desire to pursue a career with Chick-fil-A.

After graduation, Beard worked at a Chick-fi-A restaurant in Houston, as well as traveled the country helping to open brand new Chick-fil-A restaurants. While at a restaurant opening in California, he learned of the opportunity to own the chain’s Day Street location in Riverside. It was while he was helping an Operator with a store in California that the opportunity to operate the Day Street Chick-fil-A restaurant came available. Beard and his new bride, Abbie, were thrilled when he was chosen as Operator. They packed their belongings and drove to California. Beard, his wife, and their three sons have happily made Riverside their home for the past 11 years.

“I’m excited for a new challenge of a brand-new restaurant,” said Beard. “But I’m more excited to be able to expand my service in the community where my family and I already spend so much of our time.”

Beard’s new 4,800-square-foot restaurant has been designed to enhance all aspects of a guest’s experience from the drive-thru to the counter to in-restaurant dining. Highlights include a:

Atlanta-based Chick-fil-A, Inc. is a family owned and privately held restaurant company founded in 1967 by S. Truett Cathy. Devoted to serving the local communities in which its franchised restaurants operate, and known for its original chicken sandwich, Chick-fil-A serves freshly prepared food in more than 2,394 restaurants in 47 states and Washington, D.C. Chick-fil-A reported more than $9 billion in revenue in 2017, which marks 50 consecutive years of sales growth. More information on Chick-fil-A is available at www.chick-fil-a.com.