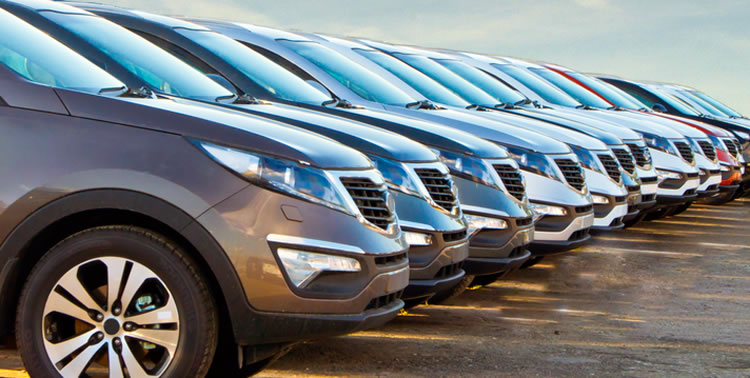 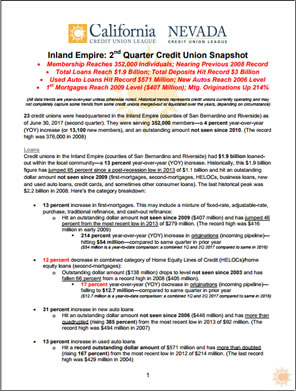 Ontario, CA –  Inland Empire residents continue taking out loans for new and used vehicles at a brisk pace according to the 2nd Quarter Credit Union Trends Report for the Inland Empire, published by the Ontario-based California Credit Union League.

The report reveals how consumers are “feeling” about purchasing small cars, sedans, trucks, CUVs, SUVs and other large items given the region’s current economic climate, as well as the future of the local auto industry’s health.

For 23 locally-headquartered credit unions in San Bernardino and Riverside counties as of second-quarter 2017:

The report also gives a sense of credit unions’ rapidly increasing market share within auto lending compared to banks, finance companies, captive financing, and buy-here-pay-here entities.  Credit unions nationwide experienced the highest auto lending growth in second-quarter 2017 versus the same period one year ago according to the latest “State of the Automotive Finance Market” presentation by Experian.

Below is yearly historical chart on national light-weight vehicle sales posted by the Federal Reserve, click here for more.

Some experts question whether the current cycle of automobile purchases by consumers has run its course.  But it might take more than “just the end of a cycle” for annual sales at car dealerships to hit a noticeable slowdown according to Dwight Johnston, chief economist for the League.

“Spending for major purchases continues to be bolstered by the combination of rising wages and job opportunities, which is keeping consumer confidence strong,” Johnston said. “Statewide year-over-year wages in California are rising above the national average—about 4 percent compared to 2.5 percent nationally. And even though growth in jobs has slowed compared to the past five years, many employers are having trouble finding workers. The available labor pool has tightened as job openings remain at an all-time record.”

Additionally, the credit union report reveals how 352,000 credit union members across the Inland Empire are spending their money on homes, remodeling projects, higher education, life events, and other big-ticket items (see data on first-mortgages, second-mortgages, HELOCs, business loans, credit cards, and other consumer loans).  As consumers make money decisions in the current environment, local credit unions are at the center of these choices.