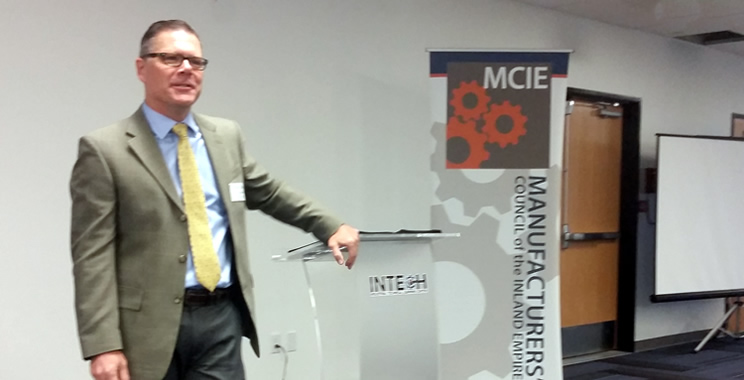 Photo Above: Todd Boppell, COO of the National Association of Manufacturers, speaks to Southern California manufacturers on national issues.

The Manufacturers’ Council hosted Todd Boppell, Chief Operating Officer of the National Association of Manufacturers (NAM), at the InTech Training Center in Fontana, on October 19.

The NAM supports expanded trade to sell more products to customers overseas. “If we are going to reach the 95% of the world’s customers that are not in the United States, we need to be on a level playing field from trade standpoint.”

On regulatory reform, Boppell said that the efforts of this administration to modernize and streamline regulations are important and that many of the biggest benefits may not even be apparent until year two or three.

Boppell encouraged the audience to talk to elected leaders about these and other issues, including how to fund infrastructure construction. He stated that we are behind the rest of the developed world and that an overwhelming number of roads and bridges are in urgent need of repair.

On workforce and apprenticeships, Boppell stated that manufacturers are having trouble finding adequate candidates to fill the hundreds of thousands of open positions and that even more will need to be filled over the coming years.

According to Boppell, the Manufacturing Institute, the 501(c)3 affiliate of the NAM, is leading efforts in a number of critical workforce areas including modernizing apprenticeship programs, reaching the next generation of workers, finding innovative ways to measure the success of certification and training programs and helping employers and educators better collaborate.

Announcements about the 2018 Manufacturing Summit, on February 15 at the Ontario Convention Center, and future meetings were also made at the event. For more information, visit the MCIE website at www.MFGcouncilie.com/events.

The Manufacturers’ Council of the Inland Empire (MCIE) supports and provides education on manufacturing topics to manufacturers, employees, students, and the community. The Council provides a strong, unified voice when communicating with regional, state and national entities on issues impacting the region. Programming is designed to help manufacturers find solutions for issues including: employment and training, research, regulatory compliance, import and export, and funding.