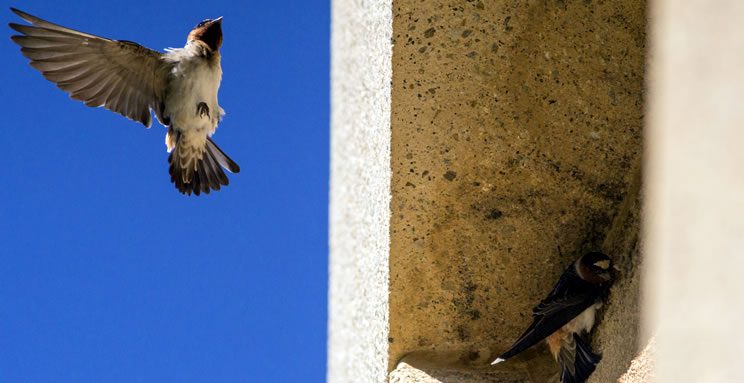 Moreno Valley, CA – Moreno Valley College’s study of cliff swallows has been selected for the National Conferences on Undergraduate Research (NCUR) at the University of Central Oklahoma in April. The NCUR, established in 1987, is dedicated to promoting undergraduate research, scholarship, and creative activity in several fields of study.

For the NCUR conference, MVC’s submission was chosen from more than 4,000 submissions. The committee cited the project’s “unique contribution” to the study of cliff dwelling swallows. Students will be presenting their work to peers, faculty and staff from across the nation.

The Flying With the Swallows (FWS) project, which was created by Joanna Werner-Fraczek, associate professor, Biology, and Diana Marsh, professor, Chemistry, is designed to integrate research into biology and chemistry courses with a common research theme.

The research project, which began in 2012, was initially supported by the Community College Undergraduate Research Initiative (CCURI). In 2015, the project was recognized and funded by National Science Foundation as an individual path to improve undergraduate education at MVC. Students study various aspects of swallow life within the suburban area, with an emphasis on the swallows’ diet and pollutants present in water and mud used by the birds to build their nests. The research has expanded each year and now includes specialized cameras around campus to monitor not only swallows but also other fauna living around our campus.

The cliff swallows are the same species of birds that brought fame to Mission San Juan Capistrano. For the last three years MVC also has organized The Swallow Day that includes swallow-related projects from other disciplines, and propagates our knowledge about those amazing birds.

Werner-Fraczek said when she applied for the first grant to study the swallows, she wanted to establish a multi-year research-based initiative with a broad impact that offers participation in scientific research on subjects that are familiar (swallows) and improve and increase STEM education opportunities at MVC. Over the years, the project has provided opportunities for students to participate in relevant and real research opportunities and for qualified faculty to obtain professional development to enhance and improve upon solid, research-supported STEM pedagogy and teaching strategies.

This isn’t the first-time students from the College have presented their studies on the swallows, which arrive early in March on the campus. Previously, students have presented at the annual Community College Undergraduate Research Initiative (CCURI) conference. It was the CCURI that first funded the College’s research.

“Six years ago, I applied for the CCURI funding,” Werner-Fraczek said. “It was a competition for being a part of the huge grant given by NSF to Finger Lake Community College to promote research-based learning in community colleges.”

MVC was selected as one of the original 28 community colleges for CCURI funding. For the last six years, MVC students have presented at the CCURI conference, sending six students to the conference last year to present.

“This grant, together with the support from CCURI, helps to cover expenses of our research,” Werner-Fraczek said. “As years go by, CCURI pays less and less. The majority of funding comes from our FWS NSF grant.”

The NCUR is different in that it includes predominantly universities and is much larger in scope than CCURI, which is just for community colleges.

“To get an abstract accepted here is a huge thing as they accept submissions from universities and colleges nationwide,” Werner-Fraczek said. “So, we were competing not against about 100 colleges from the expanded CCURI family, but against universities and colleges nationwide that conduct undergraduate research. The majority of research is for the bachelor degree. This was the first time my students applied for the NCUR.

“And their abstract was selected.”