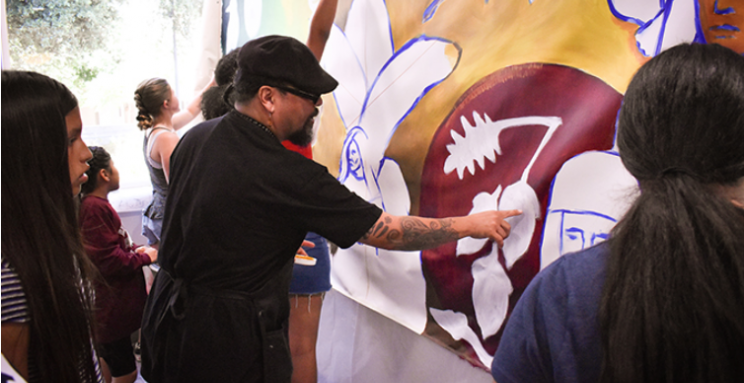 Redlands, Ca – By the time College of Arts and Sciences students return to the University of Redlands main campus in late August, there will be a new piece of art hanging in the Center for Diversity and Inclusion (CDI). The new mural is a result of a grant that Native Student Programs received from the American Indian College Fund, a Native-run organization that provides scholarships, support, and programming to improve access to higher education for Native American students.“We knew we wanted to utilize the empty wall space outside our office to build awareness for Native Student Programs and the San Manuel Band of Mission Indians Excellence in Leadership Scholarship,” says Department Coordinator Christina Lara ’19. “When we applied for the grant, we stated we were going to use the funds to make a piece of art with volunteers from the community.”Native Student Programs Assistant Director Elizabeth Shulterbrandt tapped Joe Galarza, a local Native muralist, and art instructor, to sketch the design of the mural. After growing up in Los Angeles, Galarza used art as a way to build awareness of the challenges that many Native communities face. Over the course of his career, he has been commissioned to create a number of murals and art pieces alongside Native historians, working to preserve the Native oral tradition through art. His work is a form of cultural education and preservation.“After talking with Elizabeth, I learned that the Native youth who were going to be painting the mural were Cahuilla and Serrano,” he says. “We need to acknowledge the land that we stand on, so I incorporated aspects of the participants’ Native culture and history into the mural because they are the original caretakers of this land.”A sketch of the mural hangs on the wall to guide participants. Galarza incorporated aspects of local tribal culture into the sketch. (Photo by Carlos Puma)Over the course of a month, four different organizations from across Southern California brought the mural to life. Residents of the Desert Sage Youth Wellness Center, students from the Cal Poly Pomona Native Pipeline, members of the San Manuel Department of Education, and students from Noli Indian School visited the Redlands campus on separate occasions to paint parts of the mural.Each group consisted of more than 20 participants, so members took turns painting while others played basketball and video or card games. Eleanor Navarro, a high school student from Riverside and a member of the Cal Poly Native Pipeline, kept coming back to the mural.“I wanted to take part in painting the mural because it represents my culture,” she says. “I think it’s really cool because not a lot of people make art about Native Americans and it feels good to see myself in paintings like this.”Lara is looking forward to the upcoming semester, during which Native Student Programs will host additional collaborative outreach events. At 5 p.m. on August 20, the department will celebrate the mural’s completion by hosting a formal opening in CDI.   “The University is built on Cahuilla land, and this mural is an important acknowledgment of that,” says Lara. “Students on campus can be missing their homes and communities, and now they can come into CDI and see themselves.”Learn more about Native Student Programs, which receives generous leadership support from the San Manuel Band of Mission Indians.