Ontario: More Than 100 Veterans and Service Members Share Their Stories 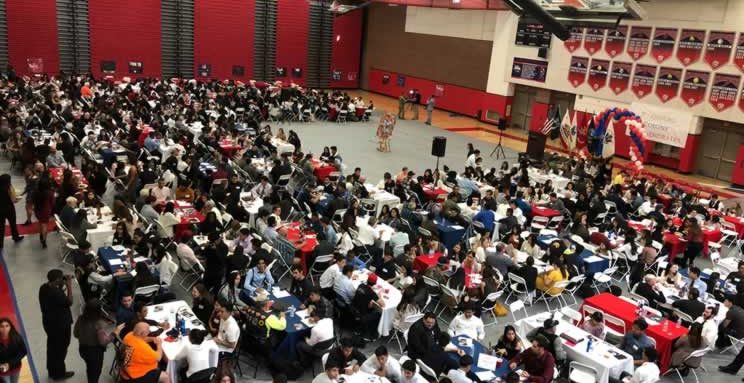 Ontario, CA – U.S. Army Capt. Roddy Nguyen has been in the military for 19 ½ years. Sharing those experiences with young adults is something that never grows old.

“It’s such a great way to talk about the lessons we’ve learned and the things we now know,” said Nguyen, one of more than 100 service members past and present who took the time to meet with students at Colony High School as part of the school’s annual celebration of the veteran community. 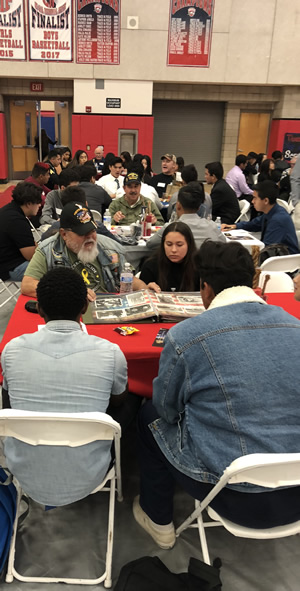 Timed 10 days before Veterans Day, this year’s Colony Commemorates event was the largest in its seven-year history, attracting veterans and service members from World War II to present.

“It’s been such a great program in terms of getting students to understand history beyond what they read in text books,” said Colony High School Principal Eric Danhof. “The veterans, too, love the fact that students want to hear their stories. It’s been an eye opener for both.”

The event started with a handful of veterans, and has grown through word of mouth and by teachers and staff at the school reaching out to military members they know. In addition to four veterans War II and some active service members, this year’s program featured veterans from the Korean War, the Vietnam War, the Cold War, Gulf War and the War on Terror.

For Nguyen, it’s important for students to have a better understanding of those battlefield experiences, but also what it means to serve in the military.

“We’re able to talk about serving our country and working hard, and, in general, being a good person. If you do the best you can, in turn, opportunities will present themselves. If you slack off, those opportunities won’t happen,” said Nguyen, who teaches military leadership at Azusa Pacific University.

Like Nguyen, retired combat engineer Cornelius Lambert has channeled his military experience into teaching young people. Having spent more than 20 years in the Army, Lambert is now an ROTC instructor at nearby Montclair High School.

“What was impressive about the (Colony High School) program today was the appreciation and respect the students showed,” Lambert said. “They recognized that the veterans who were there had served their country to make it better for the future.”

A common question, he said, was “were you scared?”

“I told them that I always felt safe because I was prepared. We had practiced what we needed to know, and that made all the difference in the world,” Lambert said.

Colony Commemorates began with a speech by retired Army Lt. Col. Robert Kirkland, who paid tribute to the veterans.

“Each veteran here today is part of a proud legacy, and they have served with honor and with dignity.  They have served in different places and in different ways, but serve they have.  They have not only fought our wars but, they have preserved the peace.  They carry on the proud legacy and traditions of all our nation’s veterans who have, throughout our history, kept us free.   Today, we say thanks to them all.”