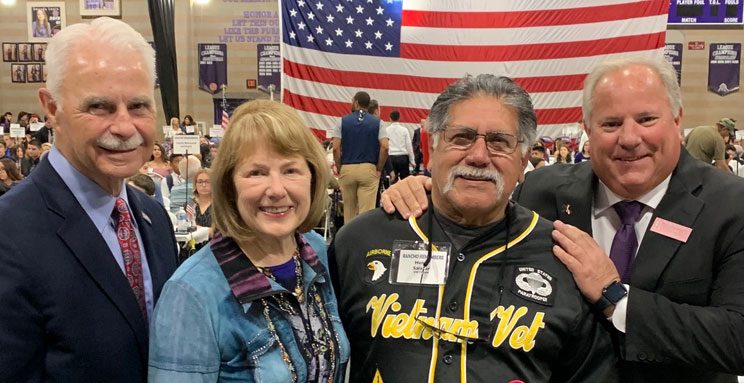 Rancho Cucamonga, Ca – Henry Salazar was three years removed from high school when he began a two-year tour of duty in Vietnam. Within months he had survived one of the largest and most brutal military campaigns of the war, when Vietcong and North Vietnamese forces launched simultaneous attacks on American and South Vietnamese troops.

The Tet Offensive of January and February 1968 was a turning point in the war, and for the 21-year-old Salazar, a defining period in his life.

“It was a nightmare. I didn’t think it was going to end. They were pounding us. We were pounding them. I watched buddies getting killed, but what got me the most was seeing the displaced people – the innocent victims of war who lost their homes, lost their villages, lost everything,” Salazar said as hundreds of service veterans gathered Thursday to share their experiences with high school students as part of “Rancho Remembers.”

The annual event, at Rancho Cucamonga High School, is designed to help students understand U.S. military history beyond what they read in text books.

“It’s a wonderful program for our school, but also for our veterans, who love sharing their stories and the reaction they get from the students,” said Cary Willborn, Principal at Rancho Cucamonga High. “They’ve served our country with honor and dignity, and this is one small way of showing them how much we appreciate their service.”

Sanchez, who served as an Army paratrooper, said he’s felt that appreciation each of the six years he has attended the event. He was joined this year by veterans from World War II, the Korean War, Vietnam, the Cold War, Gulf War and War on Terror.

“It’s very special for me to be here,” he said. “We’re able to talk with (students) about the history of war and why we have a military, and how very, very fortunate we all are to live in this country.”

Mathew Holton, Superintendent of the Chaffey Joint Union High School District, said ‘Rancho Remembers’ provides a rare opportunity for students to experience history from those who lived it.

“We’re so appreciative of the support of our veterans, who, from the very beginning, have been eager to participate and provide our students with lessons they’re not going to get anywhere else,” Holton said.