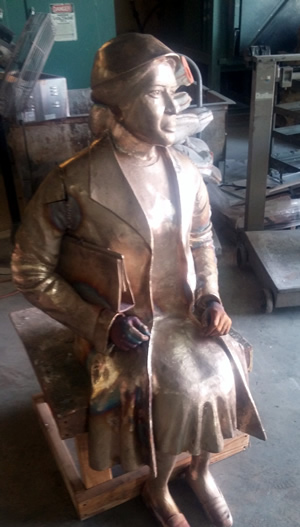 San Bernardino – On December 1st, 1955, after a long day at work, a courageous black woman by the name of Rosa Parks boldly challenged then-widely accepted Jim Crow laws, also known as enforced racial segregation, by refusing to give up her “colored” seat to a white individual on a bus in Montgomery, Alabama.

This one act of bravery led to the Montgomery bus boycott, an event that triggered what historians now refer to as the beginning of the civil rights movements in America, and that earned Parks the title of “the first lady of civil rights.”

[ecko_quote source=”Patrick Jewett”]“By adorning our public buildings and parks with artistic monuments we can inspire a sense of appreciation and history in the hearts and minds of our fellow Americans,”[/ecko_quote]

Parks’ challenge to segregation on buses brought about the end of institutionalized segregation in the South.

In March 2006, in honor of Parks’ trailblazing role in advancing civil rights, the California State Senate and Assembly designated the California Transportation Building in downtown San Bernardino as the Rosa Parks Memorial Building.

The memorial will include a life-sized bronze statue of Parks, which will be placed in front of the building. The statue will be created by renowned local artist Patrick Jewett and the project is proudly sponsored by the San Bernardino Black Culture Foundation.

“It seemed like after naming a building after her, the only thing missing was a statue of her,” Jewett said of why he took it upon himself to approach the state about creating the work of art. “And if not me, who?”

Jewett said he hopes that once the statue is in place it will give people a sense of empowerment in the ability to bring about change.  Plans for the statue have been underway for about three years and fundraising goals to turn an artistic dream into an enduring reality have nearly been reached. The community at large is invited to top off the efforts by contributing to the project that will honor this American hero.

The total amount needed is $15,000 to complete the statue. Tax-deductible donations mailed to: