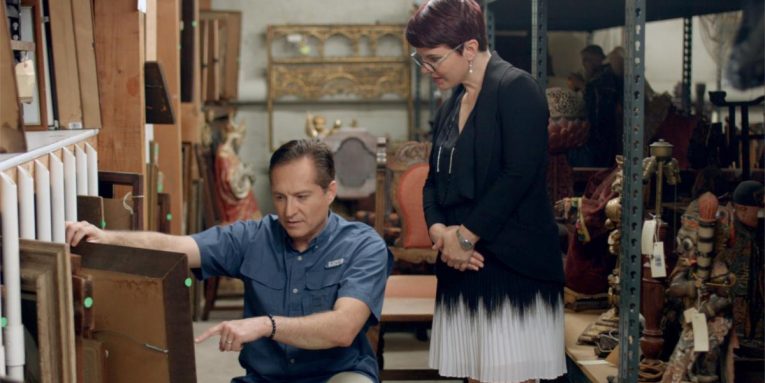 SAN BERNARDINO, Calif. — Paintings lost and neglected in the catacombs of the Mission Inn are the subject of an award-winning episode of “Uncovered in the Archives,” a documentary show aired on EMPIRE | KVCR. One of 13 episodes in the first season, it took third place for short documentaries in the 12th National Arts & Entertainment Journalism Awards for the Los Angeles Press Club.
“We are proud to be honored among such a fine group of journalists,” said Brad Pomerance, who hosts and produces the series along with CJ Eastman and Glenn Grant for Empire EMPIRE | KVCR, the public TV and radio station for the Inland Empire, operated by the San Bernardino Community College District.
The honored episode tells the story of paintings by Henry Chapman Ford of the California Missions, images credited with inspiring the Mission Revival architectural movement. Purchased for the Mission Inn, they were damaged in a flood and left to rot until a housekeeper tried to throw them away.
Citizens formed the Friends of the Mission Inn, as well as a Mission Inn Foundation, and they had the paintings carefully restored. They now hang in the hotel’s Spanish Gallery and in other spots around the hotel.
“In taping the episode, seeing the before and after of the paintings was absolutely awe-inspiring,” said Eastman, who works as the co-executive producer for the series. “The fact that they were covered in pigeon feces, and they could still bring them back to their original spectacular condition was truly amazing to me.”
Eastman and Pomerance worked together at Charter Communications on a show called Local Edition. They created and produced 13 episodes of “Uncovered in the Archives” for EMPIRE | KVCR, by visiting the archives of museums, libraries and schools. This is the first season of the show.
“Our very first episode came from an idea from Don Singer, a trustee on the board of the San Bernardino Community College District,” Pomerance remembered. “It was about the first African American to live in greater Redlands, and I wouldn’t have known about it, but for Don.” The crew found and interviewed the great, great grandchildren of Israel Beal.
Another episode, not yet aired, centers around Dr. Lyra George from Loma Linda University Health, who would go on horseback to deliver the babies of the San Manuel Band of Mission Indians in the early 1900s. Her care at a time of great prejudice saved the lives of mothers and babies. “When you watch the episode, it is clear why the tribal members feel so tied to Loma Linda and Lyra George,” Pomerance said.
He said he is proud to be working with EMPIRE | KVCR to give the Inland Empire a voice in the larger Southern California media market. He said he likes learning about people who should be more famous than they are. “These are compelling stories about very significant moments in history,” Pomerance said. “I feel honored that I have the opportunity to tell these stories.”
Eastman echoed that sentiment. “The hardest part is figuring what to leave out.”
Viewers can find “Uncovered in the Archives” on Empire KVCR or online.