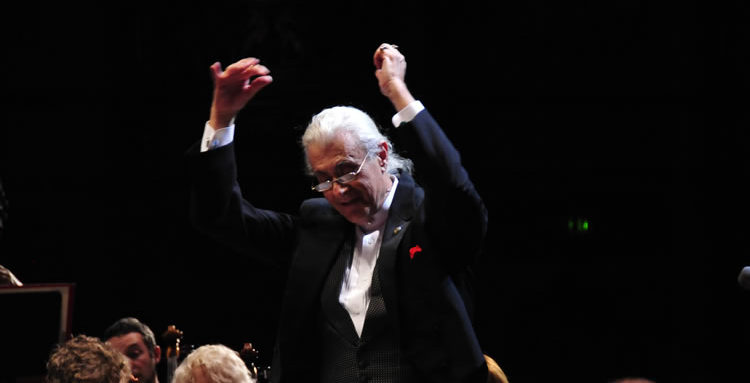 Photo Above: Maestro Frank Paul Fetta will begin his fourth season as the San Bernardino Symphony Orchestra’s Music Director and Conductor October 15 at the California Theatre of the Performing Arts. Credit: Steve Brown

San Bernardino, CA – The region’s longest-running professional symphony is preparing to open their 88th season October 15 at the California Theatre of the Performing Arts. Themed “A Season of Firsts,” the music chosen will include pieces performed for the first time by the orchestra, debuting guest artists, and selections numbered one by great composers. www.sanbernardinosymphony.org

[ecko_quote source=”San Bernardino Symphony Conductor Frank Paul Fetta”]We are proud to offer our valued audience such a beautiful and diverse season. We have many delightful surprises in store and I am very much looking forward to welcoming audiences from throughout the region,[/ecko_quote]

“It has been a long held hope of the Symphony to present a premier piece and now we are seeing this dream become a reality,” said Symphony President Judith Valles. “Larsen has clearly made a strong impression on the music world and we were extremely excited when she agreed to compose this new work and equally thrilled when we found the composition will highlight the considerable talents of our wonderful concertmaster, Todor Pelev.”

In addition to Larsen’s new composition, the opening concert will include Saint-Saens’ Danse Macabre, Brahms’ Symphony No. 1 in C Major, and Mozart’s Don Giovanni Overture  which will also feature members of the Inland Valley Repertory Theatre Company performing a scene from their production of Amadeus.

The second and third concerts of this season will be presented, in large part, through a grant from the San Manuel Band of Mission Indians.

On December 17, 2016, the Symphony will reprise its popular “Home for the Holidays” concert featuring Beethoven’s Symphony No. 9 in D minor “Ode to Joy,” selections from Tchaikovsky’s The Nutcracker Suite, Gould’s Serenade of Carols, Berlin’s White Christmas, and Biegel’s Hanukah Fantasy. A 100-voice choir will join the orchestra. Special pre-concert activities, including strolling carolers, will begin at 6:30 p.m. to lend a little extra sparkle to the evening’s festivities.

“Symphonic Surprise” will be presented on February 11, 2017, featuring acclaimed young violinist Usha Kapoor performing Mozart’s Violin Concerto No. 3 in G major. Also on the concert playbill are Stravinsky’s Puccinella Suite and Haydn’s Symphony No. 94 in G major, also known as the “Surprise Symphony” for its use of unexpected musical elements. Two back-to-back abbreviated versions of this concert will be performed February 10 for over 3,400 local students.

On March 18, 2017, audiences will enjoy a “Spring String Fling” through a concert highlighting both the orchestra’s string sections and the piano strings of the incomparable Steven Vanhauwaert. Offerings include Shostakovich’s Piano Concerto No. 1 in C minor, Bach’s Keyboard Concerto No. 1 in D minor, and Tchaikovsky’s Serenade for Strings in C Major, Op. 48.

All these concerts begin at 7:30 p.m. with a pre-concert “Meet the Composers” lecture at 6:30 p.m. provided by actors from the Inland Valley Repertory Theatre Company.

On May 14, 2017, the Symphony will perform 3 p.m. matinee – “Music for an Elegant Afternoon” – in honor of Mother’s Day. Symphony principal flutist Patricia Cloud will be the featured soloist for Ibert’s Flute Concerto. The concert will also include Schubert’s Symphony No. 6 in C Major, “The Little Symphony” and Beethoven’s Symphony No. 1 in C major. All mothers attending the concert will receive a special gift, and to make the holiday even more special, the Symphony will be offering a special pre-concert luncheon.

Said Fetta, “Our mission is to foster a love of music, excite the spirit, and enrich our diverse community and region, so in this special season our concerts will, indeed, be more thrilling, our guest artists more exciting, and, we sincerely hope, your concert experience will be more meaningful than ever before!”

Three and five-concert season packages as well as single tickets are available now and can be purchased online at www.sanbernardinosymphony.org or by calling the box office at (909) 381-5388, and, with limited availability at the Theatre on the date of each event. Single ticket prices range from $25 to $60, depending on seat location; students and military with ID are always $10.  Contact the box office to obtain a new season brochure. All regular season concerts are performed at the historic California Theatre of the Performing Arts, 562 W. 4th Street, San Bernardino.