San Bernardino, CA – As part of its 88th consecutive season, the San Bernardino Symphony will reprise its popular “Home for the Holidays” concert at San Bernardino’s historic California Theatre of the Performing Arts on December 17, 2016.

The concert will feature a number of holiday favorites including Beethoven’s Symphony No. 9 in D minor “Ode to Joy,” selections from Tchaikovsky’s The Nutcracker Suite, Berlin’s White Christmas, Biegel’s Hanukah Fantasy and more. Four soloists and a 125-voice choir will join the orchestra.

Special pre-concert activities, including strolling carolers and holiday cookie decorating will lend a little extra sparkle to the evening’s festivities. As with all concerts this season, attendees may also attend the Symphony’s “Meet the Composers” pre-concert talk courtesy of the Inland Valley Repertory Theatre Company. All pre-concert events begin at 6:30 p.m. and are included with your ticket. The concert begins at 7:30 p.m.

This concert will be presented, in large part, through a grant from the San Manuel Band of Mission Indians.

“We encourage everyone to come out and share this marvelous concert with us,” said Symphony Maestro Frank Paul Fetta. “There is no need to drive an hour to experience world class entertainment. In fact, we created ‘Home for the Holidays’ to provide a complete holiday experience for the whole family right here in the Inland Empire.”

Ludwig van Beethoven’s Symphony No. 9 in D minor “Ode to Joy” was the composer’s final complete symphony. The Philharmonic Society of London originally commissioned the piece in 1817 and it was completed seven years later, in February 1824.

The premiere of Symphony No. 9 involved the largest orchestra ever assembled by Beethoven and required the combined efforts of the Kärntnertor house orchestra and The Vienna Music Society, along with a select group of capable amateurs. While no complete list of premiere performers exists, many of Vienna’s most elite performers are known to have participated.

This symphony was the first example of a major composer using voices in a symphony, thus making it a choral symphony. The words come from Friedrich Schiller’s 1785 poem, “Ode to Joy,” and are sung during the final movement by four vocal soloists and a chorus. Today, it stands as one of the most played symphonies in the world.

The Nutcracker is one of Peter Ilyich Tchaikovsky’s most beloved compositions. Written for a two-act ballet adapted from E.T. Hoffmann’s story The Nutcracker and the Mouse King, by way of Alexander Dumas’ adapted story The Nutcracker, it premiered in St. Petersburg on Sunday, December 18, 1892, on a double-bill with Tchaikovsky’s opera Iolanta. Although the original production was not a success, the 20-minute suite that Tchaikovsky extracted from the ballet was. Over time, the complete Nutcracker has enjoyed enormous popularity and is now performed by countless ballet companies, primarily during the Christmas season.

Born Israel Isidore Baline, composer Irving Berlin’s songs have reached the top of the charts 25 times and have been extensively re-recorded by numerous singers. Dubbed the “great American minstrel” by composer Douglas Moore, who categorized Berlin’s work as having “caught and immortalized in song what we say, what we think about, and what we believe.” Composer George Gershwin called Berlin “the greatest songwriter that has ever lived”, and composer Jerome Kern concluded that “Irving Berlin has no place in American music—he is American music.”

Written in 1942, Berlin’s White Christmas reminisces about an old-fashioned holiday. Accounts vary as to when and where Berlin wrote the song. One story is that he wrote it in 1940, while staying at the La Quinta Hotel, a frequent Hollywood retreat also favored by writer-director-producer Frank Capra. He often stayed up all night writing — he told his secretary, “Grab your pen and take down this song. I just wrote the best song I’ve ever written — heck, I just wrote the best song that anybody’s ever written!”

According to the Guinness World Records, the version sung by Bing Crosby is the best-selling single of all time, with estimated sales in excess of 100 million copies worldwide. Other versions of the song, along with Crosby’s, have sold over 150 million copies.

Jeffrey Biegel’s Hanukah Fantasy is widely considered a choral tour-de-force on themes of Hanukah. With orchestration by Lucas Richman, the composition features four well-known songs and a snippet of a fifth, the work offers a panorama of full choral textures and a fresh harmonic palette. Songs include: Maoz Tsur, The Dreidel Song, Jerusalem of Gold, O Hanukah, O Hanukah (over an excerpt of S’vivon in the piano part).

Three additional concerts are planned as part of the 2016/17 season.

“Symphonic Surprise” will be presented on February 11, 2017, featuring acclaimed young violinist Usha Kapoor performing Mozart’s Violin Concerto No. 3 in G major. Also on the concert playbill are Stravinsky’s Puccinella Suite and Haydn’s Symphony No. 94 in G major, also known as the “Surprise Symphony” for its use of unexpected musical elements. Two back-to-back abbreviated versions of this concert, also sponsored by the San Manuel Band of Mission Indians, will be performed February 10 for over 3,400 local students.

On March 18, 2017, audiences will enjoy a “Spring String Fling” through a concert highlighting both the orchestra’s string sections and the piano strings of the incomparable Steven Vanhauwaert. Offerings include Shostakovich’s Piano Concerto No. 1 in C minor, Bach’s Keyboard Concerto No. 1 in D minor, and Tchaikovsky’s Serenade for Strings in C Major, Op. 48.

All these concerts begin at 7:30 p.m. with a pre-concert “Meet the Composers” lecture at 6:30 p.m. provided by actors from the Inland Valley Repertory Theatre Company.

On May 14, 2017, the Symphony will perform 3 p.m. matinee – “Music for an Elegant Afternoon” – in honor of Mother’s Day. Symphony principal flutist Patricia Cloud will be the featured soloist for Ibert’s Flute Concerto. The concert will also include Schubert’s Symphony No. 6 in C Major, “The Little Symphony” and Beethoven’s Symphony No. 1 in C major. All mothers attending the concert will receive a special gift, and to make the holiday even more special, the Symphony will be offering a special pre-concert luncheon.

Three-concert season packages still remain, as well as single tickets for each concert. Tickets can be purchased online at www.sanbernardinosymphony.org or by calling the box office at (909) 381-5388, and, with limited availability at the Theatre on the date of each event. Single ticket prices are $25, $40, $50, and $60, depending on seat location; students and military with ID are always $10.  Contact the box office to obtain a new season brochure. All regular season concerts are performed at the historic California Theatre of the Performing Arts, 562 W. 4th Street, San Bernardino. 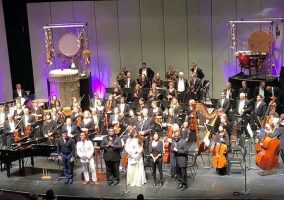 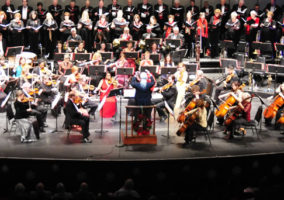