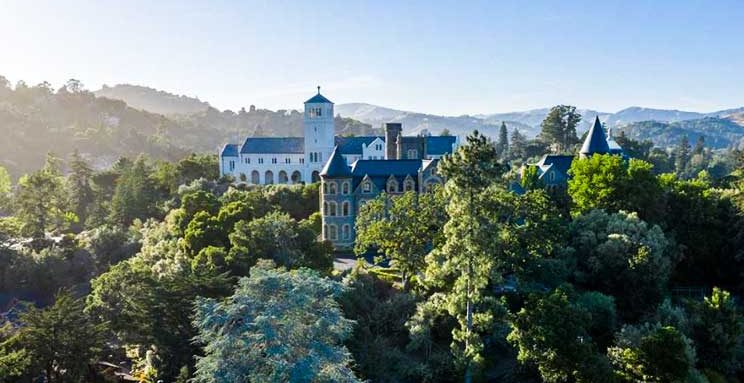 Redlands, CA – San Francisco Theological Seminary (SFTS), based in Marin County, and the University of Redlands, located in Southern California, have united in a transformative partnership—one that enhances the mission and traditions of each and opens the door to new academic offerings.“The prospect of a permanent partnership between San Francisco Theological Seminary and University of Redlands presented unique and compelling possibilities from the moment the seminary approached us as a potential partner,” said President Ralph W. Kuncl, of University of Redlands. “We share a core set of values and interests and are committed to exploring and expanding academic and career pathways for students.”Through this partnership, the institutions create the Graduate School of Theology within the University of Redlands, which will prepare students for theological engagement and meaningful ministries. The new graduate school will operate on equal footing with the University’s other, long-established schools, notably its School of Education and School of Business, as well as its College of Arts and Sciences and School of Music.This partnership, the first structural change to University of Redlands since 1976, introduces the University’s first U.S. campus outside of Southern California. (The University also has an international campus, located in Salzburg, Austria.)While San Francisco Theological Seminary, which has been a standalone institution since its establishment in the Bay Area in 1871, will become part of the secular University of Redlands, its degree offerings and other core programming will remain the same under the seminary’s name. The Marin Campus will continue to be the primary location for the seminary and its master’s and doctoral degree programs. The close relationship between SFTS and the Graduate Theological Union in Berkeley will carry forward as well.“This partnership accelerated our efforts to create a new kind of seminary for the 21st century,” said Jana Childers, dean of the Graduate School of Theology.  “I look forward to expanding our reach by opening new pathways for purposeful leadership.”University of Redlands and SFTS have already developed a joint continuing studies program—the Mental Health and Spirituality Certificate—which held its first classes in March 2019. Developed within the seminary’s Applied Wisdom Institute and the University of Redlands School of Education, the program will teach and guide community leaders, building their knowledge and competencies in mental health, spiritual care, and community engagement.Since the Agreement in Principle indicating the institutions’ intention to merge was signed in late February 2019, both have been working to obtain approval from accreditors and finalize the details of the transaction. Final affirmative votes from both Boards of Trustees occurred in May.Wells Fargo Securities, LLC served as strategic advisor, Moss Adams, LLP served as financial due diligence advisor, and Seyfarth Shaw, LLP served as legal counsel to the University of Redlands.

San Francisco Theological Seminary is a leading Protestant graduate theological school rooted in the values of social justice, spirituality, and innovation. For nearly 150 years, SFTS has prepared students from around the world for various forms of ministry. Located in Marin County, California, SFTS offers doctoral, master’s and certificate programs for people from all walks of life, on campus and online. SFTS is a founding member of, and partners with, the Graduate Theological Union in Berkeley—the most comprehensive center for the graduate study of religion in North America. For more information, visit sfts.edu.

The University of Redlands is a private, nonprofit university that connects students to a world of opportunity, geared toward their passions and potential. With campuses across California, the University offers more than 40 undergraduate programs, as well as 23 graduate programs in business, education, theology, communication sciences, and disorders, geographic information systems, and music—blending liberal arts and professional programs, applied and theoretical study, traditional majors and self-designed curricula. In addition to an award-winning 160-acre Southern California residential campus in Redlands featuring orange groves, architectural landmarks, and more than 1,700 trees, the University includes eight regional U.S. locations, providing innovative, high-quality programs at places and times that support the needs of working professionals. Surveys show that generations of alumni have found that the University, established in 1907, prepared them well for career success and lifelong learning. See redlands.edu.