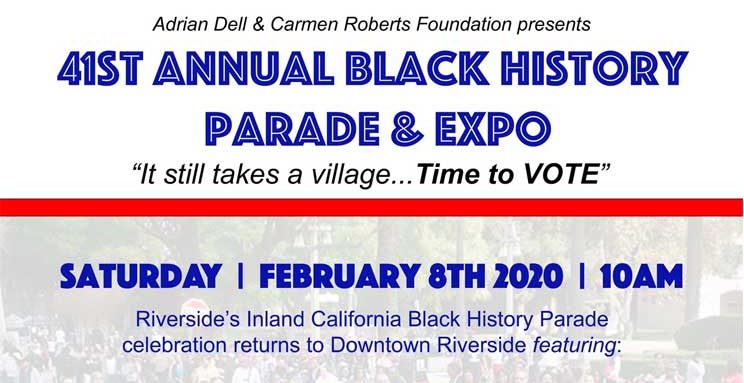 Riverside, CA – 2020 is a prominent year. Not just because it is a new decade and that it is election year, but it is the 150th anniversary of the right to vote for Blacks. On Saturday, February 8, 2020, the 41st Annual Black History Parade and Expo will be paying homage to the anniversary. The theme for this year’s event is, “It takes a Village: Let’s Vote”.

When it comes to voting, the community plays a critical role in deciding who will head counties, states and the country, as a whole. For the past 41 years the Riverside Black History Parade has played an instrumental role in bringing the community, schools and local businesses together.

With this being a monumental year for the African American community, the Adrian Dell and Carmen Roberts Foundation has teamed up with the NAACP Riverside Chapter to have their President, Dr. Regina Patton Stell, as this year’s Grand Marshall. Vision Marshalls include: UCR’s Athletic Director, Tamica Jones; Assemblymember Jose Medina; Shauna Gates, Chief of Police at Riverside Community College District’s Board of Trustees; and Community Icons Charles and Elaine Bibbs.

This year, the Riverside Black Chamber of Commerce is assisting in ensuring that the Expo is a success. Tommy the Clown will also be returning as a performer in the 2020 Riverside Black History Parade and Expo. Vendors and parade performers are still wanted. To fill out a vendor application, please visit www.adcrfoundation.org