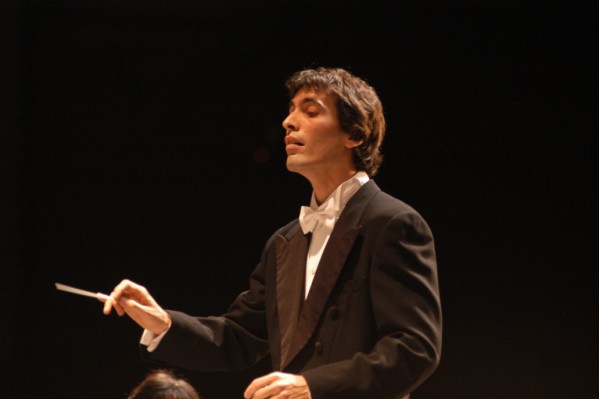 Carlo Ponti will make his final appearance with the San Bernardino Symphony Orchestra as he conducts its season finale concert, “Tchaikovsky’s Finest,” on Saturday, May 19th at 8:00 p.m. at the California Theatre of the Performing Arts, 562 W. 4th Street, San Bernardino.

The concert, which will serve as a grand celebration of Maestro Ponti’s 11-year tenure with the orchestra, features Debussy’s “Prelude to the Afternoon of a Faun,” Joaquin Rodrigo’s evocative Concierto de Aranjuez with acclaimed classical guitarist Dr. David Cahueque, and Tchaikovsky’s dazzling Fourth Symphony.

A contemporary of Stéphane Mallarmé, Debussy was thoroughly familiar with the poet’s style before he began work on his prelude to “The Afternoon of a Faun” in 1892. Debussy admirably captured that delicious vagueness of contours which is so important in the poem. The themes do not follow any stable metric patterns, remaining entirely unpredictable, thus reflecting the unconstrained nature of the faun’s dreamlike meditations.

Next, Dr. Cahueque will take the stage for Rodrigo’s Concierto de Aranjuez. The acclaimed classical guitarist is active throughout the southern California area, dividing his time between performing and teaching. He has appeared as soloist with numerous orchestras and chorale groups and has given premiers of new works for the National Association of Composers USA, including one written specifically for him titled Concerto for Guitar and Synthesis. Dr. Cahueque is also on the Board of Directors for the Orange County Guitar Circle; a non-profit organization dedicated to promoting an awareness and love of the classical guitar.

The third piece, Tchaikovsky’s luminous Fourth Symphony, crowns this evening of musical masterpieces. Tchaikovsky spent his life worrying that he could create only so much music. He wrote the piece at a particularly difficult time, wrestling with the challenges that life had placed in front of him. Thus, the Symphony traces the composer’s journey from an intense emotional crisis towards a blaze of optimism, from agitated gloom to radiant triumph.

Following the concert, a reception in Maestro Ponti’s honor will be held in the California Theatre’s California Room.

Said board president Mary Schnepp, “We are very grateful for Maestro Ponti’s eleven seasons with the San Bernardino Symphony. He has brought a dedicated intensity to his role of music director and conductor, and has most certainly brought the orchestra to new artistic levels. His presence was also instrumental in furthering the San Bernardino Symphony’s extensive music education programs, which have touched the lives of thousands of area students. We look forward to celebrating his acclaimed tenure at our upcoming May 19th concert, and invite the public to join us in wishing him well in his future endeavors.”

Tickets for “Tchaikovsky’s Finest” start at $20 and are available at www.sanbernardinosymphony.org or by calling the San Bernardino Symphony office at (909) 381-5388.