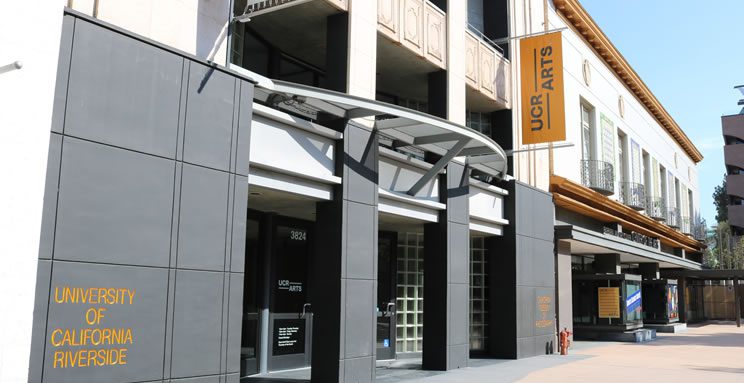 Riverside, Ca. – Formerly known as ARTSblock, UCR ARTS is comprised of two entities — the California Museum of Photography and the Barbara and Art Culver Center of the Arts — and strives to encourage community engagement and an appreciation of art and photography by providing visitors a diverse range of exhibitions, performances, and educational programs.

Following four months of renovation, the California Museum of Photography, or CMP, has reopened its doors, providing access to its collection of 750,000 objects. The CMP is dedicated to preserving a holistic history of photography, offering photographs and photography-related apparatus spanning across the medium’s development as well as renowned and dynamic contemporary photography exhibitions. With the largest public collection of photographic technology in the western United States and the world’s largest archive of stereoscopic photographs and negatives, the CMP is an important destination for researchers worldwide.

“This name change is reflective of a renewed vision that embraces UCR ARTS’ relationship to the University of California, Riverside and a commitment to creating an inclusive and inviting place for the Riverside region and beyond,” said Sheila Bergman, executive director of UCR ARTS.

Housed in a pair of renovated department store buildings from the late 19th and early 20th centuries, UCR ARTS’ history extends to the founding of the Jack and Marilyn Sweeney Art Gallery in 1963 and the California Museum of Photography in 1973. In 2010, the Barbara and Art Culver Center of the Arts opened, offering a new home for the Sweeney Art Gallery and new community space for the Inland Empire.

Now, UCR ARTS has shifted focus from growing in size to growing in reach by enhancing its programming and cultivating a thriving arts community.

“From major thematic exhibitions, historical photography exhibitions, and artist projects, to new work by emerging artists and curators, and touring exhibitions, we strive to cover the range and diversity of photography and contemporary art.” Bergman said.

Along with facilities upgrades improving visitor experience, the CMP is opening a new Permanent Collection Gallery on the museum’s third floor. Currently on view until Feb. 10 is “Collected,” the museum’s first complete reinstallation of its permanent collection gallery in over 20 years. Moving from its longtime location on the back of the first floor to its new home on the third floor, the new gallery will feature regularly rotating selections from the collection.

Also on view at the CMP until Dec. 9 is the touring exhibition, “a Handful of Dust: from the Cosmic to the Domestic.” This internationally acclaimed exhibition debuted at Le Bal in Paris, showcasing at the Whitechapel Gallery in London and Pratt Institute in New York before making its way to Riverside, with the CMP being its only stop in the United States after New York. Centered on one peculiar photograph by artist Man Ray, “a Handful of Dust” presents a speculative history of the 20th century and examines war, mortality, and ruin through the lens of dust.

Offering a multidisciplinary creative space, the Culver Center serves as an incubator for bold and artistic expressions. A host of art installations and exhibits, a weekly film program, and music, dance, and theatrical performances, and community events are presented year-round in the Culver’s atrium.

“Yunhee Min & Peter Tolkin: Red Carpet in C” is slated to open in the Culver Center on Aug. 18. This large-scale, undulating installation will weave through the atrium, presenting a virtual translation of the relationship between music and architecture.

“We are building on our history of exemplary exhibitions and performances by widening our scope,” Bergman said. “UCR ARTS is a place for the Inland Southern California community to convene and engage in robust arts and cultural programming.”