With 90% of Initial Goal Raised, Riverside Extends Agreement on “The Cheech” 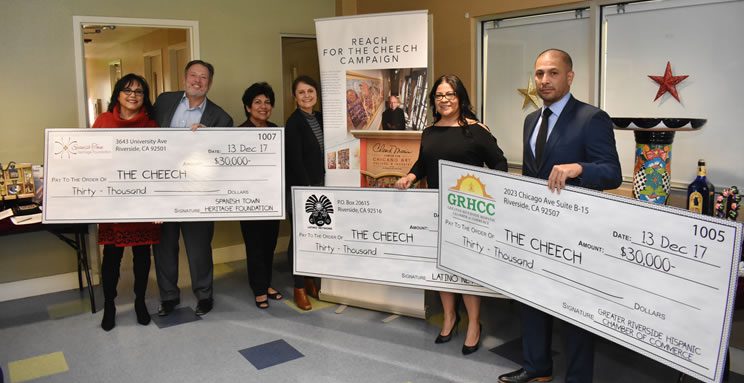 Riverside, Calif. – The City of Riverside has extended an agreement with the Riverside Art Museum and Cheech Marin by 90 days to allow time to raise the remaining 10 percent of an initial $3 million investment in the Cheech Marin Center for Chicano Art, Culture and Industry in downtown Riverside and to finalize agreements between RAM and the City, and RAM and Cheech Marin.

“The generosity of the Riverside community and of art lovers from around the world has shown us we are on the right path with ‘The Cheech,’” City Manager John Russo said. “There is strong interest in creating a destination museum in Riverside, as evidenced by the commitments this effort has received thus far.”

The three parties entered into a Memorandum of Understanding (MOU) last year to explore ways to create what is expected to be a world-class center for Chicano art built around Marin’s extensive collection, the most renowned in the world. The original MOU would have expired on Feb. 26, but all three parties agreed to extend it until May 29.

The Cheech Marin Center is planned for a city-owned building at Mission Inn Avenue and Orange Street in the core of Riverside’s arts and entertainment district. The building now houses the downtown Main Library, which is being relocated to a new facility a few blocks away.

“The art world is very excited about the evolution of ‘The Cheech’ and is following our progress closely,” said Marin, the noted actor, comedian and art collector. “I look forward to continued progress in partnership with RAM and the City to make this project a ‘must see’ destination.”

The MOU calls for the City to hire consultants and work with RAM and Marin to develop a facility assessment, art center programming, conceptual plans and rough cost estimates. The City Council approved a $100,000 professional services agreement for architectural services with the firm Page & Turnbull, which has more than 40 years of experience bringing new life to historic buildings.

The $100,000 included in Phase 1 of the project will pay for the items needed for public presentations and other materials needed to market and raise funds for the project, which is expected to cost $7 million to $10 million, which will be raised privately.

“The progress that is being made on ‘The Cheech’ is further proof that downtown Riverside is the arts and entertainment center of Inland Southern California,” Mayor Rusty Bailey said. “Much gratitude is due to RAM for spearheading the fundraising campaign so that this important project can proceed without burdening the Riverside taxpayer.”

The City of Riverside, RAM and Marin, working with local state legislators, already have obtained $1 million in funding from the State of California. Three local organizations — Riverside Latino Network, Greater Riverside Hispanic Chamber of Commerce, and Spanish Town Heritage Foundation – in December pledged $30,000 each toward the effort, for a total of $90,000, and agreed to raise a combined $250,000. RAM is conducting an extensive campaign through the Reach for the Cheech Capital Campaign Committee. The effort can be found online at www.thecheechcenter.org.

“From the time City Manager Russo came to us with the idea for The Cheech, we have worked tirelessly to fundraise, build stronger partnerships, plan, and further innovate our exhibition and education programming in preparation for The Center,” said Drew Oberjuerge, RAM Executive Director. “We are grateful for the efforts of our Capital Campaign Committee and the Community Chair Ofelia Valdez-Yeager.”

RAM and Marin envision ‘The Cheech’ as the “center of Chicano art, not only painting, but sculpture, photography, and video arts.”  The centerpiece of the Cheech Marin Center will be the artist’s private collection, which he is gifting to the Center. Much of the collection formed the core of his blockbuster exhibition, Chicano Visions: American Painters on the Verge, which broke attendance records during its groundbreaking 12-city tour during 2001-07 to major art museums across the U.S.

“Riverside has a history of strong commitment to the arts, and the Cheech Marin Center is the next step in that evolution,” Mayor Pro Tem Chris MacArthur said. “I applaud RAM and all the community organizations that have made this initial fundraising campaign so successful.”