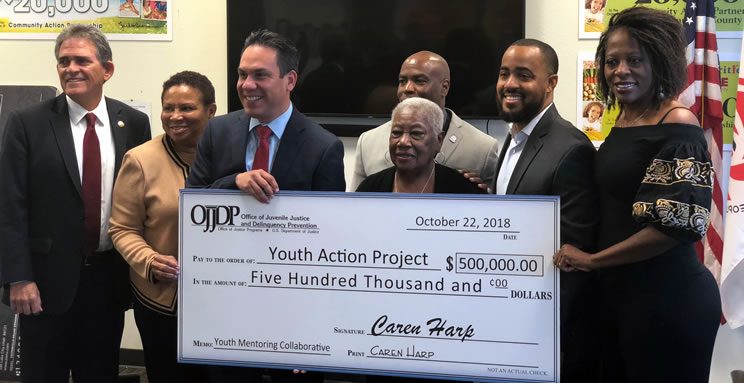 “Our region has not been immune to the nationwide opioid crisis, and too often when a young person in our community struggles with addiction, they have no clear place to turn. I’m grateful for the work of Youth Action Project to provide Inland Empire youth with the resources they need to lead happy and successful lives free from the weight of opioid addiction,” said Rep. Aguilar.

Because the OJJDP e3p3 Modeled Grant will include the City of Rialto and its middle and high schools, as one of the targeted cities, Mayor Deborah Robertson of Rialto added, “Rialto continues to be a pioneer in moving initiatives forward that will empower our residents. This initiative affords the City of Rialto, students and their families in being one of the first beneficiaries in California of efforts addressing the Opioid Crisis through mentoring supported by OJJDP.” The project was one of 12 projects funded nationwide to provide mentoring to youth at-risk of Opioid abuse.

YAP, Young Visionaries and Sigma Beta Xi have all been funded under prior initiatives using the e3p3 Model, designed to accelerate grant resources into cities/regions, and were excited to see it work once again to further assist youth in the region. In addition, earlier this year, Rep. Aguilar’s office held a Federal Grants Workshop to highlight best practices and share strategies for success when applying for federal grants which was attended by a representative from YAP. “The resources awarded by OJJDP will support our efforts to make sure the real winners are our youth” – said Joseph Williams President SBCCD Board and YAP CEO. He further stated: “Our youth are in crisis, they are being influenced by many fronts to experiment with drugs and we will do all we can to help them combat bad information. Now more than ever drug use is promoted in music, movies and social media. We have to continue helping and mentoring our youth in making informed decisions.”

Today’s announcement comes just over one year since Rep Aguilar announced an additional $500,000 to combat the broader opioid crisis within the Inland Empire.