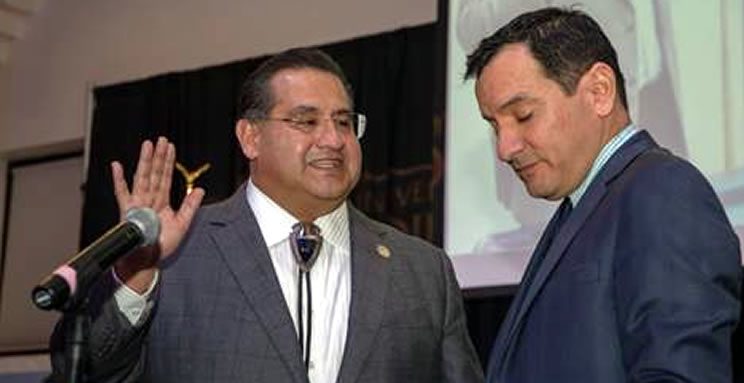 San Bernardino, CA – It was a historic day at Cal State San Bernardino on Feb. 10 as one of its distinguished alumni, James Ramos, held a community swearing-in ceremony on campus to celebrate a historic achievement and milestone as the first California Native American elected to the state Assembly.

The ceremony was a celebration as Ramos joined in with fellow tribal members as they sang Big Horn Sheep songs following the invocation by Pastor Reginald Young of San Bernardino Pastors United at the start of the ceremony, and later at the end to sing intertribal bird songs.

Cal State San Bernardino President Tomás D. Morales welcomed the nearly 400 people in attendance, telling them that this was also a special day in CSUSB’s history.

“It is an especially proud moment for this university. We are thrilled to see James Ramos – a distinguished alumnus of this great university who has been an outstanding leader within this community and a tremendous role model for countless people – sworn in to represent the state’s 40th Assembly District,” Morales said. “The fact he is the first California-born Native American elected to the Assembly is truly significant.”

Morales praised Ramos, who graduated from the university with a bachelor’s degree in business administration with a concentration in accounting, for his hard work and dedication.

“I congratulate you on your election. You inspire us with your leadership, your vision, and your commitment to the constituents you serve,” Morales said. “I sincerely look forward to working with you during your long tenure in the state Assembly.”

Aguilar said he has known Ramos for 15 years.

“Throughout my time on the Redlands City Council and now in Congress, James has been a devoted partner dedicated to working with me to improve the region that we grew up in,” Aguilar said. “James has given a voice to members of our community who have been left out for so long.”

Gonzales thanked the audience and local voters for “sending us such a wonderful representative.”

Medina said Ramos is already making a difference since arriving in Sacramento.

Frazier, chair of the Assembly Transportation Committee to which Ramos has been appointed, said Ramos is “always ready to jump in. He’s a doer. He’s not a talker and I can’t thank you enough for sharing him with us. I know sometimes at the local level when you give up a man of his stature that sometimes you suffer on the local level, but I assure you, absolutely assure you, you will not suffer with James Ramos on the state level.”

“When you spend just seconds with James Ramos, you get that sense of community, that deep commitment to his roots and that absolute desire to do something for those people who sent him to Sacramento,” Rendon said.

When it was Ramos’ turn to speak, he thanked his family, friends and colleagues for their support. He thanked President Morales for opening up Cal State San Bernardino and hosting the event at the university’s Santos Manuel Student Union.

“It really is with great honor that we continue to move forward and spending the time here at Cal State San Bernardino,” Ramos said. “The motto is ‘We Define the Future,’ and as we look around this room, and we look around where we are today, to be sitting inside a building named after my great-great-grandfather Santos Manuel, the first building named after a California Indian leader in the state of California is right here in Cal State San Bernardino.”

In 1866, tribal leader Santos Manuel led his people to safety from the San Bernardino Mountains to the valley to escape militia forces that killed many tribal members.

“To be represented in the state Assembly, representing at the district level for the state Assembly, going onto the state of California will ensure that for at least this time moving forward, that the presence of the Indian people and the voice that they share throughout the community, not just on the Indian reservation, but throughout the community” will be heard, Ramos said. “California is home to more individual native people than any other state in the nation and we finally have a voice in the state legislature making rules that apply to the people.”

Prior to the assembly, Ramos served as a San Bernardino County supervisor when he was elected in 2012.

In 2015, he was unanimously elected by his colleagues to serve as board chairman. He was also the first Native American to be elected to the county Board of Supervisors, as well as to the San Bernardino Community College Board of Trustees, on which he served from 2005-12.

Ramos is also the immediate past chairman of the San Manuel Band of Mission Indians, with a deep commitment to the preservation of California Indian culture. He is a co-founder of the San Manuel Band’s Cultural Awareness Program, and serves as director of the California Indian Cultural Awareness Conference held annually at CSUSB.

He and Terri, his wife of 29 years, have four children and three grandchildren.

For more information on Cal State San Bernardino, contact the university’s Office of Strategic Communication at (909) 537-5007 and visitinside.csusb.edu.