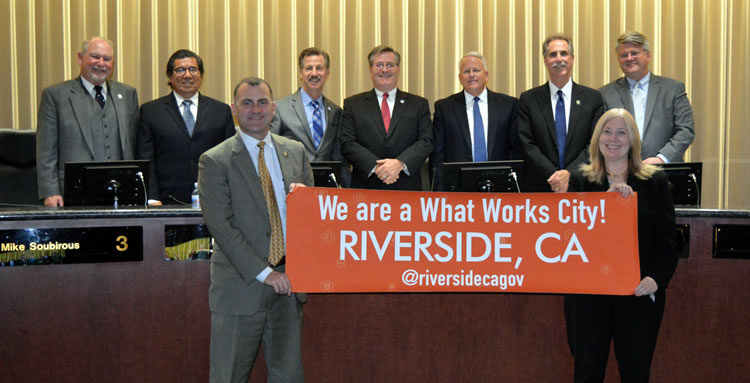 The move came after City officials met at the end of April with bond rating agencies and major investors to discuss significant positive changes that have and are occurring in Riverside, as a result of recommendations by the City’s executive leadership team and actions by Mayor Rusty Bailey and the Riverside City Council.

“There is no greater evaluator of what you are doing financially than the raw, unvarnished feedback you get from the rating agencies,” said City Manager John A. Russo. “They can be brutally honest about what they think of your performance, so when they upgrade your rating, it’s a validation of your financial management.”

Russo, Assistant City Manager Marianna Marysheva and Chief Financial Officer Scott Miller briefed officials from Standard & Poor’s during recent meetings. They also met with investment firms that hold bonds the City has sold in the past.

Russo, Marysheva and Miller outlined significant positive changes the City has made, including switching to a two-year budget and five-year plan; reducing ongoing costs to align with ongoing revenues; successful passage of the Measure Z sales tax that will generate more than $50 million in additional  General Fund revenues; creation of a Budget Engagement Commission to provide input on City budgeting priorities; and the focus of the Mayor, City Council and management on fiscal prudence measures, including a 20 percent General Fund reserve and paying off a $32 million interest-only pension bond in ten years.

“Our city has made major strides in the past two years in greatly improving our finances and the way we manage them,” Mayor Rusty Bailey said. “The payoff for taxpayers is better bond ratings, lower costs associated with borrowing, and millions of dollars in savings over time.”

Riverside officials were notified this week of the bond rating upgrade. The General Fund base rating has been increased from AA- to AA, while the rating for Pension Obligation Bonds improved from A+ to AA-.

S&P specifically upgraded its view of Riverside’s management score from “strong” to “very strong” and boosted the City’s financial management assessment score from “good” to “strong,” the highest designation S&P has for local governments.

The passage of Measure Z, which gives the City more budget flexibility, and the City Council’s aspirational goal of increasing the City’s reserves to 20 percent both played a major role in the upgrades.

“Not all of the things we have done financially have been easy, but they all have been worth it,” Mayor Pro Tem Mike Gardner said. “Making tough financial decisions, including a commitment to growing our reserves to more healthy levels, certainly is going to pay off in the long run.”