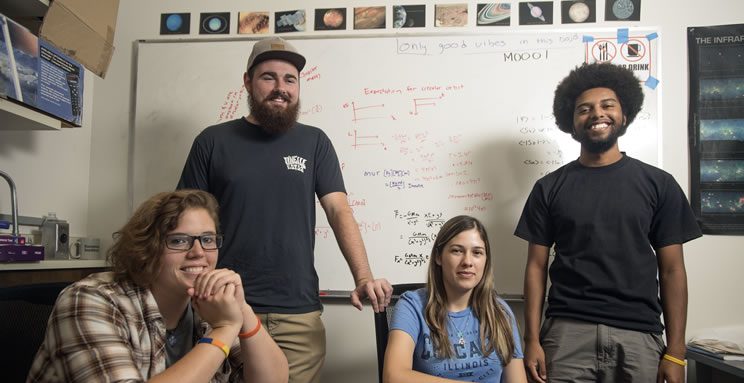 Pomona, CA – A consortium of 15 California State University and 9 University of California campuses has been awarded a five-year, $5 million grant from the National Science Foundation to dramatically increase diversity in physics and astronomy through the Cal-Bridge program.

Launched four years ago at Cal Poly Pomona, Cal-Bridge creates a pathway for students from multiple CSU campuses to attend Ph.D. programs in physics and astronomy at UCs across the state. The program has already had a national impact on the number of students from underrepresented groups graduating with a physics degree and matriculating to Ph.D. programs in physics or astronomy. The new grant allows Cal-Bridge to expand from about a dozen scholars per year to as many as 50 statewide. The national average of underrepresented minorities, or URM students, earning a Ph.D. in these fields is about 80 per year.

“This grant will increase representation nationwide by 50 percent, all from one program in California,” said Alexander Rudolph, a Cal Poly Pomona professor of physics and astronomy, and director of the Cal-Bridge program.

“CSU students are often not aware of the opportunities to continue their education,” Rudolph said. “The Cal-Bridge program is designed to provide the mentoring and financial resources they need to help them achieve their dreams of becoming physicists and astronomers.”

Cal-Bridge scholars are recruited from 15 CSU campuses and more than 40 community colleges in the Cal-Bridge network, with the help of local faculty and staff liaisons at each campus.

“I firmly believe the adage that ‘talent is equally distributed, but opportunity is not,’” said Soraya M. Coley, president of Cal Poly Pomona. “Cal-Bridge is an engine of opportunity that is providing transformative educational experiences for students across our state.”

The program uses research-validated selection methods to identify “diamonds-in-the-rough” — students from underrepresented groups who display strong non-cognitive abilities along with academic potential — and provides them with the support necessary to successfully matriculate to a Ph.D. program in the Cal-Bridge network. Once selected, Cal-Bridge Scholars benefit from substantial financial support, intensive joint mentoring by CSU and UC faculty, professional development workshops, and exposure to a wide variety of research opportunities.

Cal Poly Pomona senior and Cal-Bridge Scholar Evan Nunez, from Torrance, has been fascinated by the universe since he was seven when he read a book on Venus. “I was immediately hooked because of how deceiving Venus was. Since Venus is similar to Earth in mass and size, we expected there to be life. Instead, we found hell. That was so astonishing.”

The Cal-Bridge program awards up to $10,000 per year in financial aid to each scholar, based on demonstrated need, for up to three years.

Cal-Bridge just selected its fifth cohort of 25 scholars from 10 CSU campuses across the state, including three news scholar from Cal Poly Pomona, bringing the total number of scholars to 59 in five cohorts, including 34 Latinos, 7 African-Americans and 25 women. (Fifteen of the 25 women are from underrepresented minority groups).

“To maintain U.S. competitiveness in the global economy, the need to encourage participation from diverse groups of students to produce a highly trained and well-educated STEM workforce is paramount,” said Andrea Johnson, Ph.D., program director of the National Science Foundation’s Division of Undergraduate Education.“The NSF is thrilled that the Cal-Bridge program is one of the institutions taking the lead in this endeavor.”

Alison Baski, dean of science at Cal Poly Pomona, noted, “Cal-Bridge can become a model for expansion to other STEM degrees and to other states that have systems such as California or across states to create similar networks that can have a concrete impact on the number of underrepresented students who are in STEM disciplines such as physics and astronomy.”

See more about the Cal-Bridge program.