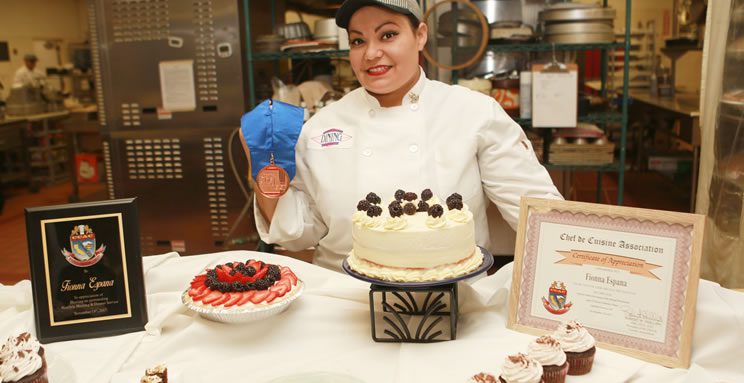 The competition included chefs with over 30 years of experience in the culinary industry. Criteria for the award includes being a well-rounded chef, from pastry to main courses, and using those skills to benefit the community. Espana’s volunteer work ranges from helping young chefs land jobs in kitchens in her role as student president for ACF California to baking 100 pies on Thanksgiving for community events and volunteering her skills for Veteran’s Day events.

At Cal Poly Pomona, Espana organizes the Los Olivos kitchen as the day begins. She assists chefs with recipes, makes needed specials for events or the vegan station, and works with the sous chef planning menus and creating recipes for special events and seasonal food items from the university’s farm. She is also part of the team working on implementing a culinary certification process, through ACF, which will give Cal Poly Pomona students another option to obtain necessary credentials.

During the academic year, Los Olivos serves about 600 students at lunch and 700 at dinner each day. To feed them, the kitchen prepares two to three main line options, multiple pizzas, sides, about 12 dozen mixed cookies, four 10-inch cakes and six to eight pies.

Most popular among her desserts at Los Olivos are the lemon bars and assorted cookies. The dessert most anticipated is her seasonal fresh pumpkin cheesecake.

“I really enjoy making the pumpkin cheesecake,” says Espana, “because most people don’t get it until the holidays. I wait until September when pumpkins come into season and make the pumpkin puree from scratch. The cheesecake is so creamy and delicious.”

In addition to baking, Espana enjoys the creative challenge of creating vegetarian and vegan entrees and desserts. Her recent favorites are pistachio-crusted tofu cutlets served with roasted root vegetables and a vegan three-layer cake for a recent sustainable food event at the dining hall.

“It looked like a wedding cake,” said Espana. One layer was cookies and cream. The second layer was chocolate buttercream, and the third was white cake with blueberry filling.”

“Having delicious vegetarian and vegan entrees available is really important,” Espana explained. “The items should taste really good so that the fact they’re vegetarian or vegan is an added bonus. It encourages more people to try them.”

Over the last year, about six percent of the U.S. population has chosen a vegan diet, according to Espana. At Los Olivos, students eat about 50 servings of our vegan and vegetarian courses each day.

“At first I was worried about creating vegan and vegetarian recipes,” said Espana. “Butter and eggs are my staple. They still are, but you can make really good food without them. Our vegan desserts really taste good.”

Espana first learned to cook from her grandmother and, at age 12, made her first traditional Thanksgiving dinner. After having her first two children, she followed her dream and graduated from Le Cordon Bleu College of Culinary Arts and then worked in the cooking industry. Following the birth of twins, she built her own custom cake business, returning to full-time work in commercial kitchens when all of her children were in school. She joined the Los Olivos staff in June 2017.

“Los Olivos is committed to hiring the best in the restaurant industry,” said Aaron Neilson, director of dining services. “Fionna is a great example. We are honored to have her as a part of our team.”

Los Olivos Dining Hall is run by the Cal Poly Pomona Foundation, Inc., which is a Section 501 (c) (3) nonprofit organization that operates as a recognized auxiliary of the California State University.