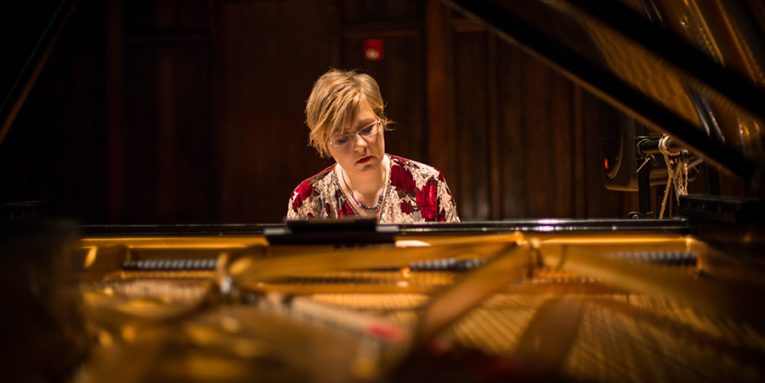 The award for Best Classical Compendium also recognized the work of producers Marina A. Ledin and Victor Ledin, and Barry Werger-Gottesman, Shpachenko’s husband and the chief engineer on the CD. All received Grammy Awards.

Shpachenko said she often feels attuned to the spaces where she performs, drawn to the ornamentation, history, light and sound of a concert hall. Through her most recent project, she found out that she is not alone.

“The music on this album is exciting, diverse and adventurous,” she said. “The composers use many unusual instruments, such as the toy piano in Kirsten’s “h.o.p.e.” or the handmade percussion instruments in “Frank’s House,” all made of materials that Frank Gehry’s house features, including plywood, chain link fencing and corrugated metal.”

The album was recorded at Skywalker Sound and released on the Reference Recordings label.

Shpachenko was previously nominated for the 58th Grammy Awards for her debut Reference Recordings CD “Woman at the New Piano: American Music of 2013” in the categories Best Classical Compendium and Best Chamber Music/Small Ensemble Performance. That album and “The Poetry of Places” were also nominated for Producer of the Year, Classical.

At Cal Poly Pomona, Shpachenko leads the piano performance program and was awarded the 2017 Provost’s Award for Creative and Scholarly Activities.

For more information about the album, visit http://nadiashpachenko.com/recordings-the-poetry-of-places/.