Celebrando Chicano Art Gala To Raise Funds for The Cheech 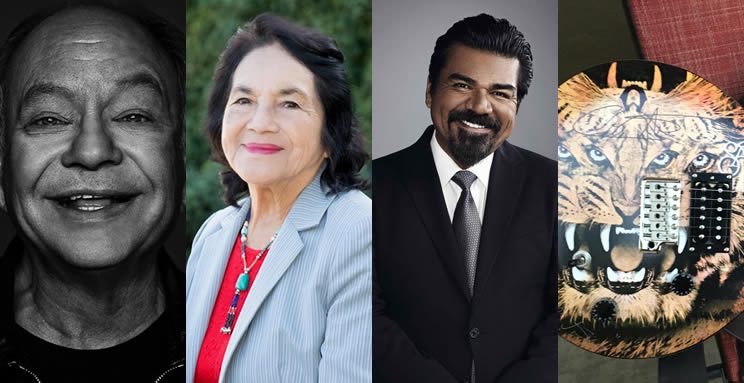 Receiving the Chicano Industry Award during the Celebrando Chicano Art Gala will be Cardenas Markets.

Jesus Cardenas was an ambitious and determined young man when he came to this country from the state of Jalisco, Mexico, in 1957. Jesus traveled to California under the “Bracero” work program. For years, he worked in the fields of California with the goal of providing a better future for his family, determined to someday own his own business. He never imagined that this dream would someday become a reality and his chain of stores would become a leading business in the same communities he became acquainted with for the first time while working in the fields.

Cardenas Markets LLC is proud to continue its expansion as part of a dynamic and solid investment group establishing the foundation to become. The #1 chain of Hispanic supermarkets in the United States, the values and traditions instilled by the Cardenas Family remain current in day-to-day operations, as is their commitment to the communities they serve.

UNIDOS is also pleased to announce Pep Fernandez as the emcee of the Gala.

Pep Fernandez is an award-winning sports anchor and radio host with more than 18 years in the TV/radio sports broadcasting business.

A limited number of tickets are left! Purchase ASAP at UNIDOS.givesmart.com.

We are pleased to announce that Cheech Marin will be receiving a Patron of the Arts Award during the Gala, presented by fellow actor/comedian George Lopez. In addition, three other awards will be presented that night: a Chicano Culture Award to Dolores Huerta; a Chicano Art Award to Cosmé F. Cordova, and a Chicano Industry Award will also be presented.

The evening’s entertainment will be provided by TIERRA. Named “Best R&B Vocal Group” in 1981 by Billboard Cashbox, Record World, and BRE (Black Radio Exclusive) magazines, Tierra is the first Hispanic act to have four songs on the national Pop charts and three songs simultaneously in the top 100 charts. Tierra’s invigorating blend of R&B, Latin, and Pop, is the precursor to many Hispanic artists. They performed at such prestigious venues as Carnegie Hall, The Greek Theater, Dodger Stadium, The Rose Bowl, Red Rocks, Houston Astrodome, as well as such television shows as The American Music Awards, American Bandstand, Soul Train, Solid Gold, and many others.

Additionally, the Mariachi Divas will perform during dinner. Founded in 1999 by trumpet player Cindy Shea, the Two-Time Grammy Award-Winning Mariachi Divas de Cindy Shea is a multicultural, all-female ensemble that continues to push and expand the scope of mariachi music. Since 2003, Mariachi Divas has been the official mariachi of the Disneyland Resort where they entertain audiences of all ages and backgrounds on a year-round basis. In addition to performing regularly at the Disneyland Resort and when they are not busy recording albums, Mariachi Divas and their music can be found in films, music videos, Hallmark greeting cards, and movie soundtracks, as well as touring across the United States and Mexico.

DJ Anthony Guaracha will spin during the VIP reception. Anthony Guaracha, DJ TJ Pops, began DJ-ing in the mid-1990s. He has volunteered at the University of California, Riverside, radio station, KUCR, since he was an undergraduate student in 2001, interning for the Radio Aztlan program. He enjoys participating in events that support and highlight the community.

Receiving the Chicano Culture Award during the gala will be Dolores Huerta, Founder & President of the Dolores Huerta Foundation and co-founder of the United Farm Workers of America with Cesar Chavez. Dolores Huerta is a civil rights activist and community organizer. She has worked for labor rights and social justice for over 50 years. In 1962, she and Cesar Chavez founded the United Farm Workers union. She served as Vice President and played a critical role in many of the union’s accomplishments for four decades. In 2002, she received the Puffin/Nation $100,000 prize for Creative Citizenship, which she used to establish the Dolores Huerta Foundation (DHF). DHF is connecting groundbreaking community-based organizing to state and national movements to register and educate voters; advocate for education reform; bring about infrastructure improvements in low-income communities; advocate for greater equality for the LGBT community; and create strong leadership development. She has received numerous awards, among them, The Eleanor Roosevelt Human Rights Award from President Clinton in 1998. In 2012, President Obama bestowed Dolores with The Presidential Medal of Freedom, the highest civilian honor in the United States.

Receiving the Chicano Art Award during the gala will be Cosmé F. Cordova, artist and Founder/Director of Division 9 Gallery. Cosmé F. Cordova is a Mexico native that moved to Riverside with his family when he was a young child. Growing up, Cordova was a natural-born artist and he quickly gained his footing as one of Riverside’s premier creative leaders. Cordova has established himself as a professional artist who works in several mediums with acrylic painting being his favorite. In 2001, Cordova founded and is the Director of the Riverside-based Division 9 Gallery. Through the years, Cordova has enhanced the role of arts and cultural events in the City of Riverside. Included in the list of his inspired signature events are: Riverside Arts Walk on First Thursdays, Amo Frida Festival, Cinco de Mayo Festival, and now in its 15th year, the Riverside Day of the Dead Celebration. Cordova is an integral part of Riverside’s cultural identity and brings to the forefront both established and emerging local artists, as well as art students from local educational institutions. Cordova’s goal has always been to bring the diverse community of Riverside together using the arts as our common ground and believes, “there is much to learn from the celebration of our differences.”

We wouldn’t be having this Gala if it wasn’t for Cheech Marin. To honor him, UNIDOS is presenting him with a special Patron of the Arts Award this evening. Best known as one half of the hilariously irreverent, satirical, counter-culture, no-holds-barred duo Cheech and Chong (now back on tour), Cheech Marin is a paradox in the world of entertainment. Cheech is an actor, director, writer, musician, art collector, and humanitarian, a man who has enough talent, humor, and intelligence to do just about anything. He is truly a multi-generational star.

Cheech is recognized today as a preeminent Chicano art advocate. In the mid-1980s, he began developing what is now arguably the finest private collection of Chicano art. Much of it formed the core of his inaugural exhibition Chicano Visions: American Painters on the Verge, which broke attendance records during its groundbreaking 15‐city tour during 2001‐2007 to major art museums across the United States. He states, “Chicano art is American art. My goal is to bring the term ‘Chicano’ to the forefront of the art world.”

Following the success of Chicano Visions, over a dozen additional exhibitions drawn from the Cheech Marin Collection have toured more than 50 major art museums across the United States and in Europe under the direction of Melissa Richardson Banks. In addition, art books have been independently published to accompany many of these exhibitions, including Papel Chicano: Works on Paper from the Collection of Cheech Marin, Chicanitas: Small Paintings from the Cheech Marin Collection, and Papel Chicano Dos: Works on Paper from the Collection of Cheech Marin. Artwork from his collection inspires his work in other ways. For example, the bottle design of Tres Papalote Mezcal, for which Cheech serves as the brand ambassador, was inspired by the contemporary glass sculptures and other works of Einar and Jamex de la Torre, two brothers who are represented his collection.

Furthering his goal to introduce Chicano art to a wider audience, Marin has entered into a partnership with both the City of Riverside and the non-profit, non-governmental Riverside Art Museum to create the Cheech Marin Center for Chicano Art, Culture & Industry of the Riverside Art Museum. Slated to open in 2020, The Cheech as the Center was affectionately dubbed by Marin, will become the permanent home for his more than 700 works of Chicano art, including paintings, sculptures, and photography; collectively, the most renowned Chicano art collection in the United States.

We are excited to announce that George Lopez will be at the Gala to present the Patron of the Arts Award to Cheech Marin!George Lopez’s multi-faceted career encompasses television, film, standup comedy, and late-night television. Lopez is currently on his standup comedy tour, The Comedy Get Down, with Eddie Griffin, D.L. Hughley, and Cedric the Entertainer in arenas across the country. The comedians recently debuted their BET-scripted comedy series based on their tour. Lopez will next be seen in Cinedigm’s thriller River Runs Red with Taye Diggs, John Cusack, and Luke Hemsworth, set for release on November 2, 2018. Written and directed by Wes Miller, the film tells the story of a respected judge who switches his gavel for a gun and seeks revenge after two policemen murder his only son in cold blood.

UNIDOS will also be presenting a Chicano Industry Award during the Gala. More info to come.

The Latino Network, the Greater Riverside Hispanic Chamber of Commerce, and Spanish Town Heritage Foundation formed an alliance in December 2017 and pledged a combined organizational commitment of $90,000 to The Cheech. They further pledged to raise an additional $160,000 for a grand total of $250,000 by expanding the alliance to all Chicano Latino organizations, big and small, across the region. This alliance is now called UNIDOS.

“The coming together of UNIDOS speaks to the importance of The Cheech as more than just an art center or museum,” says Ninfa Delgado, UNIDOS Chair. “The Cheech is significant in that it preserves, teaches, and celebrates the heritage and contributions of a people in America.”

UNIDOS is a collaboration of Chicano organizations and individuals who are working together to raise funds to make The Cheech a reality; a dynamic daily demonstration of the presence and voice of the Chicano community. Unidos members have and continue to work in addressing issues impacting the community in the areas of civic engagement, leadership, business and economic development, education, culture, historic preservation, housing, health, civil rights, peer mentorship and more.

ABOUT THE RIVERSIDE ART MUSEUM

The Riverside Art Museum integrates art into the lives of people in a way that engages, inspires, and builds community by providing high quality exhibits and art education programs that instill a lifelong love of the arts. RAM relies on the generosity of members and donors to support its exhibitions, education programs, and special events. A 60-plus-year-old, non-profit cultural arts institution housed in a National Historic 1929 building designed by Hearst Castle and AIA Gold Medal-winning architect Julia Morgan, the museum welcomes over 50,000 visitors a year. The museum is open Tuesday – Saturday, 10:00 a.m. – 4:00 p.m. and Sunday, 12:00 noon – 4:00 p.m. For information on exhibits, events, classes, memberships, or sponsorship opportunities, visit www.RiversideArtMuseum.org. For information about the proposed Cheech Marin Center for Chicano Art, Culture & Industry of the Riverside Art Museum, visit www.riversideartmuseum.org/cheech or www.thecheechcenter.org. Find us on Facebook (www.facebook.com/riversideartmuseum), Twitter (RAMRiverside), Instagram (@riversideartmuseum), and Pinterest (www.pinterest.com/ramarts).