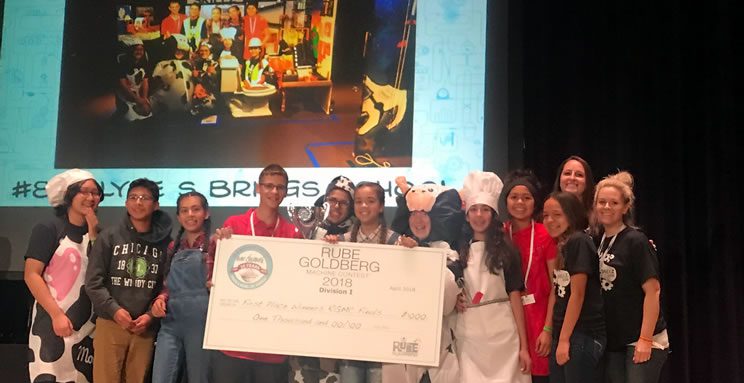 The Briggs team, which was the San Bernardino County Division I champion in November, was among more than 350 student inventors nationally who competed at the Rube Goldberg event.

The contest is named after Goldberg, a Pulitzer Prize-winning engineer and cartoonist, who satirized machine design in his cartoons. A “Rube Goldberg” is defined as a complicated and funny way to complete a simple task.

The task at this year’s national contest was to “Pour a Bowl of Cereal.” The Briggs team referred to itself as “General Skills” a play on cereal-maker General Mills. There was a total of 38 teams that competed at the national event.

For more information on the competition, go to http://rubegoldberg.com

Rube Goldberg (1883-1970) was a Pulitzer Prize winning cartoonist best known for his zany invention cartoons. He was born in San Francisco on the 4th of July, 1883 and graduated from The University of California, Berkeley with a degree in engineering. His first job at the San Francisco Chronicle led to early success, but it wasn’t until he moved to NYC and began working for Hearst Publications that he became a household name. Rube Goldberg is the only person ever to be listed in the Merriam Webster Dictionary as an adjective. It’s estimated that he did a staggering 50,000 cartoons in his lifetime.

Rube Goldberg, Inc. is dedicated to keeping laughter and invention alive through the legacy of its namesake. Annual competitions, image licensing, merchandising, and museum and entertainment opportunities continue to grow and enhance the brand. At the helm is Rube’s granddaughter, Jennifer George, whose best-selling book on her grandfather, The Art of Rube

Goldberg, is now in its fourth printing. RGI is a not-for-profit 501(c)3 dedicated to promoting STEM & STEAM education for students of all ages.