UCR Report – State of Immigrants in the Inland Empire 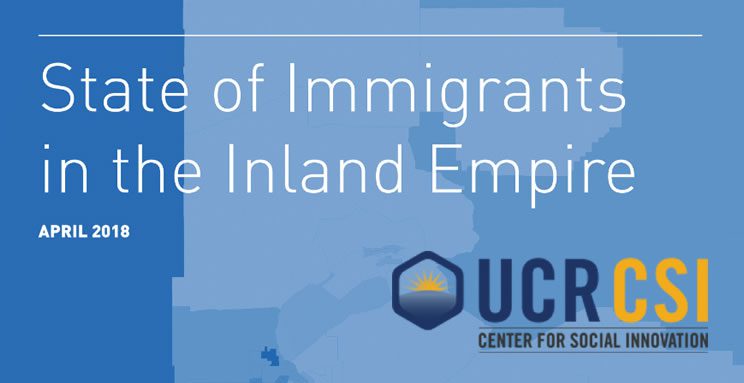 EVENT: Discussion on “Inland opportunities – immigration and a changing region” on Dec. 4th

Riverside, Ca – One in five residents of the Inland Empire is an immigrant. But until now, no single resource has provided a comprehensive view of the region’s immigrant population and the key policy issues that have affected and continue to impact it.

That all changes with the publication of “State of Immigrants in the Inland Empire,” a report released Wednesday afternoon during a launch event at the University of California, Riverside.

Co-authored by researchers and advocates from UCR’s Center for Social Innovation, the California Immigrant Policy Center, and the Inland Coalition for Immigrant Justice, the report offers a multifaceted look at the nearly 1 million immigrants living in Riverside and San Bernardino counties.

While introducing the project, Center for Social Innovation Director Karthick Ramakrishnan described it as the result of collaborative partnerships formed with private and public stakeholders to address policy issues tied to immigration.

“We want this to be a resource for the community,” Ramakrishnan said, noting researchers will continue to add new data and other materials to the report’s digital edition.

So far, the first iteration of the project features a range of U.S. Census Bureau statistics about the Inland Empire’s more than 972,000 immigrants, a slight majority of whom live in Riverside County. According to Ramakrishnan, some of the statistics included might surprise readers.

“There’s an increasing share of immigrants who are citizens,” he said of the Inland Empire’s demographics. “That’s an example of a story we don’t often hear when we think about the immigrant population in this region.”