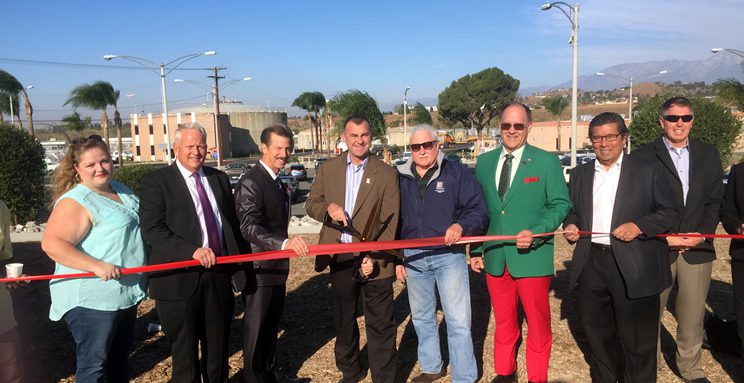 RIVERSIDE, Calif. – The City of Riverside on Thursday celebrated the completion of the largest public works project in the city’s history, a high-tech renovation of the wastewater treatment plant that was completed $6 million under budget and positions Riverside for future growth and development.

“This project is an excellent example of how Riverside stays at the front of the pack when it comes to innovation and excellence,” Mayor Rusty Bailey said as people gathered for a 9 a.m. ribbon-cutting ceremony. “This cutting-edge technology will serve our city well, now and into the future.”

“This project, using the best available technology, means that Riverside can rest assured that this important responsibility is being met using safe and sustainable technologies that set the standard in the nation,” Public Works Director Kris Martinez said.

The project is part of an ongoing effort to ensure Riverside is capable of providing high-quality water and wastewater treatment in the decades to come. Additional investment in the city’s older sewer infrastructure also is planned.

The project also includes storage for bio-methane gas that is created as a byproduct of the wastewater treatment process. Bio-methane gas is a renewable resource and is used on-site to heat digesters that break down the waste materials. A new, 1.4 mega-watt, fuel cell electrical generation system will produce about 40% of the total electrical demand at the site, and the storage of excess fuel will reduce the city’s need to buy natural gas. This moves the City a step closer to the goal of reaching energy independence for the treatment plant.

The renovated wastewater treatment plant, at 5950 Acorn Street, also features a new odor control system, with tank covers and a method for scrubbing the foul air before it leaves the eight sedimentation tanks and reaches the atmosphere.

The project was complex in that the existing system had to remain in place and operating, even as construction and renovation work touched about 70 percent of the facility. Constant supervision and care ensured that during the project, no regulatory water quality violations occurred as a result of the construction activity.

New technology also means that the plant will be able to process as much as 60,000 gallons of waste material from local restaurants and food processing plant each day, turning that material into bio-methane for use in generating electricity.

“Any project that is nearly five years in the making, including four years of actual construction, at a site where activities are heavily regulated — that’s a major accomplishment,” Mayor Pro Tem Jim Perry said. “The fact that the project came in $6 million under budget is very gratifying to see when taxpayers are rightly calling on the city to be good stewards of tax money.”