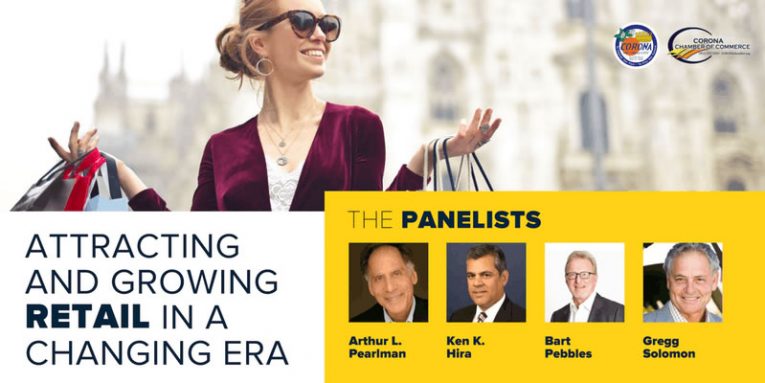 Corona, CA – The landscape of retail is changing, mostly due to consumer spending habits. Many traditional retailers are either reinventing themselves or downsizing to keep up with the growing presence of online shopping. Great shopping options aren’t enough anymore; those who aren’t adjusting their sails are going out of business. This panel of recognized experts will give you great insight as to WHY some retailers are closing, what’s coming next and what you can do as a consumer.

Join the free panel discussion and networking event on Friday, January 11, 2019, from 2 to 4 p.m. in the Council Chambers at Corona City Hall.

Arthur L. Pearlman has been in commercial development for 38 years and has developed 41 shopping centers in California and Nevada. Internationally recognized, Mr. Pearlman is the recipient of the 2010 International Council of Shopping Centers (ICSC) Trustees’ Distinguished Service Award, ICSC’s highest honor and most prestigious official recognition of distinguished service and contribution to the association, to the worldwide retail real estate industry, and to society and the community at large. Mr. Pearlman has spent several decades teaching Real Estate Development at Wharton School as well as years of teaching at USC’s Lusk school and UCLA’s Anderson School, Extension Division.

Ken K. Hira serves as President of Kosmont Companies. An expert in retail development and strategies for retail attraction, Mr. Hira has over 25 years of experience in virtually every aspect of real estate financing, downtown revitalization, acquisition, entitlement, development, asset management and disposition. Mr. Hira’s expertise is in identifying retail tenants and negotiating retail and blended-use projects that can revitalize communities and assist in economic development/tax generation programs. Mr. Hira is an active volunteer leader of the International Council of Shopping Centers.  He was nominated and serves as the ICSC P3 Retail Advisory Board Co-Chair, nationally advocating public-private partnerships.

Bart Pebbles is the founder of CALIBER REAL ESTATE GROUP. His successful background encompasses 33 years in the real estate industry, principally within the development of retail and residential properties. As President, Mr. Pebbles is responsible for directing all phases of CALIBER’s operations, including Acquisitions & Dispositions, Contract Negotiations, Entitlement Processing, Project Management Development Administration, Financial Analysis, Capitalization, Marketing & Leasing programs, Value Added Asset Repositioning Programs. Prior to founding CALIBER in 1992, Mr. Pebbles was Development Partner for American Commerce Centers, based in Newport Beach California. During his seven-year tenure with American Commerce Centers, Mr. Pebbles was responsible for the day-to-day operations of the Company.

Gregg Solomon is currently the Senior Vice President of Leasing for Metro At Main, the new face of Corona, with 70,000 Square feet of beautiful mixed-used retail. Previously, Mr. Solomon spent 15 years at Quiksilver America, a publicly traded company as the Senior Vice President of their Retail Division. During his tenure, the retail organization grew from two franchised stores to 131 company-owned stores, 23 franchises, 1300 employees and 170 million in revenues. After leaving Quiksilver, he started his own consulting firm, advising startup retailers in all aspects of Retail including sight selection.

Kimberly Davidson is the Economic Development Manager for the City of Corona, where she encourages the attraction and growth of retail, manufacturers, entrepreneurs and tech companies. Ms. Davidson has been in Economic Development for more than 10 years and previously owned a home-based marketing firm. Ms. Davidson was named “Woman of the Year” in 2016 by Assemblywoman Melendez and received the “Citizen of the Year 2014” award from the Murrieta Chamber of Commerce. In 2008, she received the National Small Business Administration (SBA) Award for being a champion of home-based businesses. Ms. Davidson serves on the Board of Directors for the National Association of Women Business Owners (NAWBO-IE).