The funding is a significant step toward the advancement of EMWD’s proposed Perris North Groundwater Program, which is a long term solution to improve groundwater quality in the North Perris Groundwater Basin, in the Moreno Valley area. The program would also make beneficial use of available local groundwater supplies, up to 6,700 acre-feet per year, further reducing reliance on imported water supplies.

The grant award covers up to 50 percent of the estimated $72 million program to remove and contain nitrates, perchlorates, volatile organic compounds, and total dissolved solids from groundwater in the basin.

Groundwater in Perris North Basin includes the area of March Air Reserve Base (MARB), which is served potable water by Western Municipal Water District. Improving local groundwater quality and availability in the region would benefit all agencies involved.

“We thank the State Water Resources Control Board for their support and shared vision toward a sustainable solution,” EMWD Board President Ron Sullivan said. “They have been a valued partner to EMWD, and we appreciate their ongoing commitment toward addressing groundwater quality issues in the region.”

The grant funding – part of the voter-approved Proposition 1 Water Bond of 2014 – aligns with EMWD’s Strategic Plan objective to aggressively pursue outside funding to reduce financial burden to EMWD customers.

EMWD has for many years been among the most active and successful agencies in California in securing external funding to advance critical water, wastewater and recycled water programs for the benefit of its customers and the surrounding region.

EMWD received more than 20 letters of support that were included in its grant application. EMWD has active state and federal legislative programs that have helped gain overwhelming support for the proposed program. Among the most vocal proponents have been State Senator Richard Roth, Congressmen Ken Calvert and Mark Takano, and United States Senators Dianne Feinstein and Kamala Harris and the County of Riverside. The project also received critical support from the California Department of Water Resources and Governor Gavin Newsom’s Military Council.

“We sincerely appreciate the ongoing support of our key stakeholders and partner agencies,” EMWD General Manager Paul Jones said. “Those letters of support, phone calls and advocacy efforts on behalf of EMWD continue to demonstrate to funding agencies that EMWD is committed to partnering with other organizations for the mutual benefit of our ratepayers.”

EMWD is continuing to work with Western Municipal Water District and the Department of Defense (DOD) on interagency agreements and other potential opportunities, such as the ability to partner with Western Municipal Water District for a local, more sustainable water supply for MARB. EMWD will continue to collaborate closely with the DOD to secure assurances that the proposed Perris North Groundwater Program will not interfere with ongoing water quality mitigation programs at MARB.

The program is currently in the preliminary design phase and, pending funding approval and cooperative agreements, would then move into the design and construction phase. 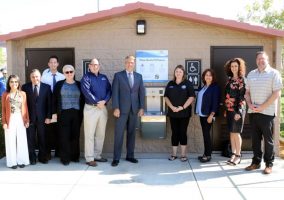