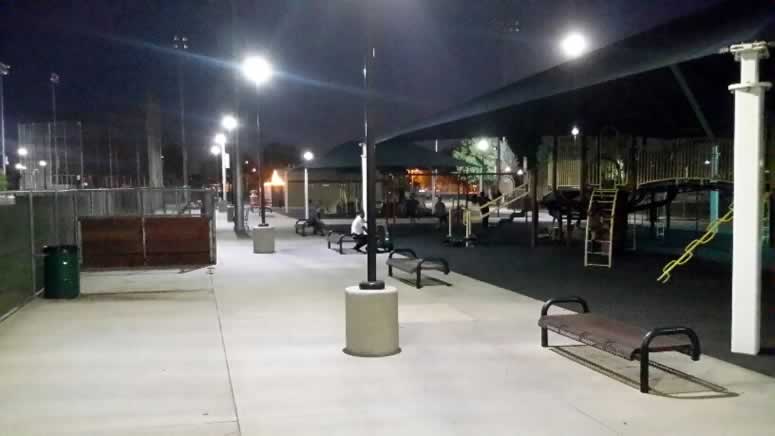 Fontana, Calif. –  Bill Martin Park located at 7881 Juniper Avenue in Fontana has several new safety improvements. Park visitors will see the addition of new upgraded LED lights in the existing security light fixtures to improve nighttime visibility, as well as video surveillance cameras, improvements to the restrooms to combat ongoing vandalism concerns and an overnight security guard to patrol the park seven days a week. Some of the changes are in response to safety concerns following a deadly shooting that occurred in the area July 5, 2016.

The City of Fontana Public Works Department recently installed 59 LED lights in the park security fixtures that are much brighter and significantly reduce the amount of necessary maintenance. Other security light fixtures will be upgraded with LED lights as funding becomes available. Another safety measure includes the addition of an unarmed guard service. Beginning on Monday, July 18, 2016, the City contracted with Securitas to provide an unarmed guard service seven days a week during the times of 6:00 p.m. to 6:00 a.m. The Public Works Department is covering the cost with currently budgeted funds from their yearly contract with Securitas that also provides security services at the Lewis Library and Metrolink Station.

“We are working to enhance safety and security for all of our park visitors,” said City of Fontana Spokeswoman Martha Guzman-Hurtado. “We also rely on the public to be our eyes and ears out there; if you see something suspicious call the police.”

Public Works staff is in the process of installing security features to the bathroom at Bill Martin Park to curb recurring vandalism. You can also expect to see new signs next week notifying the public that the park is under video surveillance.

In addition, the City of Fontana Community Services Department has Field Monitors that visit the park daily to assess park amenities such as fields, shelters, playgrounds and restrooms to ensure that everything is in proper working order. When concerns arise outside of their purview, Field Monitors contact Public Work or Fontana Police to address those issues immediately. Please see City of Fontana Park Rules and Regulations.

The Fontana Police Department Bicycle Unit and Patrol officers are also providing extra patrol around the park especially during hours of operation. “Keeping the City safe is a team effort and we are all in this together,” added Guzman-Hurtado.