ONTARIO, Calif. – Frontier Airlines will launch new low-fare service between Ontario (ONT) and three new cities starting this fall. Frontier will celebrate the new service with fares as low as $49* at flyfrontier.com.

[ecko_quote source=”Alan D. Wapner, President of the Ontario International Airport Authority. “]The addition of ONT to Frontier’s route map with service to three prominent markets is the largest commitment of new air service at our airport in more than a decade[/ecko_quote]

The new cities from Ontario include the following: Austin, Texas; Chicago O-Hare; and Denver. Frontier will operate these new routes with Airbus A320 family aircraft. Today’s announcement is part of a national announcement where Frontier is bringing low fares to 21 new cities and 85 new routes, which will include 90 percent of the U.S. population.

The addition of ONT to Frontier’s route map with service to three prominent markets is the largest commitment of new air service at our airport in more than a decade,” said Alan D. Wapner, President of the Ontario International Airport Authority. “This milestone reflects the significant role ONT continues to play in the Southern California aviation market and serves as a strong message to Frontier and others that we will do everything in our power to help them succeed in the region.”

Frontier is focused on more than low fares. The carrier offers customers the ability to customize their travel to their needs and budget. For example, customers can purchase options a la carte or in one low-priced bundle called the WORKSsm. This bundle offers Frontier’s most popular options for as low as $59** each way and includes refundability, a carry-on bag, a checked bag, the best available seat, waived change fees and priority boarding.

To celebrate our new service from Ontario to 3 new cities, Frontier is giving the Ontario community a chance to win 4 round trip flights. Enter at: bit.ly/FrontierContest

Following is a summary of the new service:

Frontier Airlines is committed to offering ‘Low Fares Done Right’ to more than 80 destinations in the United States, Canada, Dominican Republic and Mexico on nearly 300 daily flights. Headquartered in Denver, Frontier’s hard-working aviation professionals pride themselves in delivering the company’s signature Rocky Mountain hospitality to customers. Frontier Airlines is the proud recipient of the Federal Aviation Administration’s 2016 Diamond Award for maintenance excellence and was recently named the industry’s most fuel-efficient airline by The International Council on Clean Transportation (ICCT) as a result of superior technology and operational efficiencies. 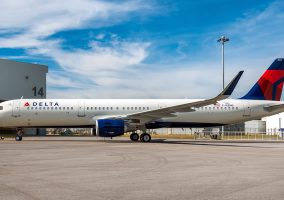