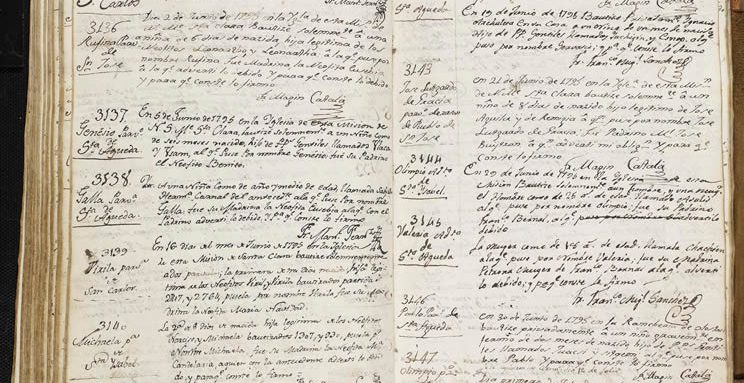 Through his Pobladores Project, Steven Hackel spotlights the non-American Indian settlers and soldiers who lived in California between 1769 and 1850

Riverside, Calif. – Understanding American history is a challenge, but what happens when some of that history is scattered, inaccessible, and in another language? Steven Hackel, a professor of history at the University of California, Riverside, knows these obstacles all too well.

Hackel was recently awarded an archival grant by the John Randolph Haynes Foundation to continue his work with The Pobladores Project Database, which aims to provide a greater understanding of the non-American Indian population in colonial California through 1850. The funding will also help establish an online presence for the database.

Throughout his 25-year research and writing career, Hackel has focused on the history of Spanish colonial California; the influence of Father Junípero Serra, the canonized Franciscan priest who initiated the system of California missions; and colonial North America. His research reveals the complexity of Spanish colonization in North America, a broad segment of American history that’s embedded in non-English sources — that is, ones that don’t begin in the original 13 English colonies of the East Coast.

The Pobladores Project Database, the construction of which Hackel commenced in 2009, is named for the settlers and soldiers from Spain and Mexico who lived in California between 1769 and 1850.

Though the lineages of many contemporary residents of Los Angeles can be traced back to these early settlers and soldiers, little is known about them. Hackel found that existing research couldn’t answer fact-based questions about, for example, lifespan, familial relations, and geographic moves.

Part of the challenge of making such groups’ histories more visible stems from the complexity of transcribing their original records. A bulk of the data is contained in documents from the California missions, whose records use language and abbreviations that make transcription a tedious process. Even gaining access to such records can be difficult, as their fragility and age complicate their conservation. Still, Hackel saw the potential in establishing the new database.

“We can make some very important and powerful comparisons between colonial Los Angeles and other regions, and other places that Spain settled in the early period,” he said. “We need to start sort of from the bottom — the building blocks for a new way of understanding early California history. This database will be a foundation for generations of new research.”