Ontario, CA – Credit unions serving members in the Inland Empire recently generated a $780 million annual impact to the region’s economy (both counties combined), which supported 5,600 local jobs and also produced $87 million in savings to those members according to two special reports released today by the California Credit Union League for San Bernardino County and Riverside County.

The economic impact of both locally-headquartered and non-local credit unions serving members in both counties in 2016 also contributed to the industry’s total statewide impact across California, which was $17 billion. This is equal to the same positive effect as some of the nation’s largest corporations in America, including Kraft Heinz, General Mills, Xerox, and Facebook—each having approximately $17 – 18 billion in annual revenue.

As they pump financial benefits back to members through offering better interest rates on loans and deposit accounts, as well as lower or no fees, these 46 credit unions were serving more than 1.1 million members across the Inland Empire through a mixture of online and mobile banking channels, as well as a network of112 branches that members can visit in person.

The reports were commissioned by the League and independently completed and published by ECONorthwest, an economic research and consulting firm in Portland, OR. The study looked at balance sheet, regulatory “call report,” and operational data to come to its conclusions. ECONorthwest completed an independent analysis of credit unions surveyed and used a “multiplier-effect” model to extrapolate its economic conclusions.

“Credit unions’ combined ripple effect in the broader economy cannot be ignored as their financially cooperative, not-for-profit model reinvests local dollars back into local economies,” said Diana Dykstra, president and CEO of the League, which is based in Ontario, CA. “These reports reaffirm credit unions’ efforts to empower their members by helping them make wise financial decisions and thrive.”

Both the economic-impact report(s) and local quarterly-trends report comes at a time when local policymakers engage in a renewed focus on the economic health of individuals. Household wealth and socio-economic mobility are increasingly seen as being tied to opportunities in financial education, an area many credit unions consider their strength.

“Research shows that up to half of wealth inequality may be caused by differences in financial literacy,” states a January 2017 Education, Income and Wealth article published by the Federal Reserve. “As a result, people are more likely to use costly home loan mortgage products, pay higher transaction costs and fees, and use high-cost borrowing options.”

The California Credit Union League is based in Ontario, CA and is the state trade association for 328 credit unions headquartered across California. The League represents the interests of nearly 11 million individuals who are member-owners of their locally-headquartered credit unions. Credit unions help consumers afford life and prosper! http://ccul.org/ 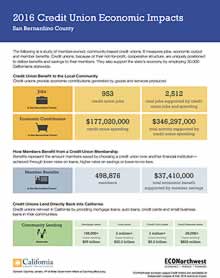 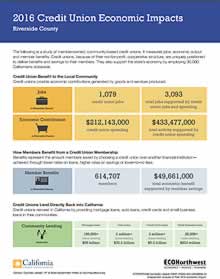