A continuing series on the Inland Empire Economy, “Corner on the Market” by Ron Burgess of RedFusion Media, 1/27/17.

The U.S. Department of Commerce breaks out Manufacturing, Transportation, and Wholesale, as separate industries. However when taken as one larger “industrial” group of similar businesses, they represent the largest “sector” in the Inland Empire of Southern California. This is true for the number of companies and the payroll contributed to the economy operating in the region. Note that Government agencies are not included.

The industrial sector represents goods manufactured, warehoused, and distributed to consumers and other businesses. So it is an interesting comparison to retail, healthcare and social services, construction, and other smaller non-producer industries. Construction might be considered “industrial” by some, but was excluded because it applies to real property not goods. Mining is industrial in nature but is a very small part of the IE economy.

In the below chart, the total payroll for the “Industrial Sector,” is by far the largest segment of employment. While the retail sector hires almost as many people as the industrial sector, when measuring payroll, retail falls below the healthcare and social assistance sector as well. This is doubtless because the health care and social assistance wages are much higher in healthcare. 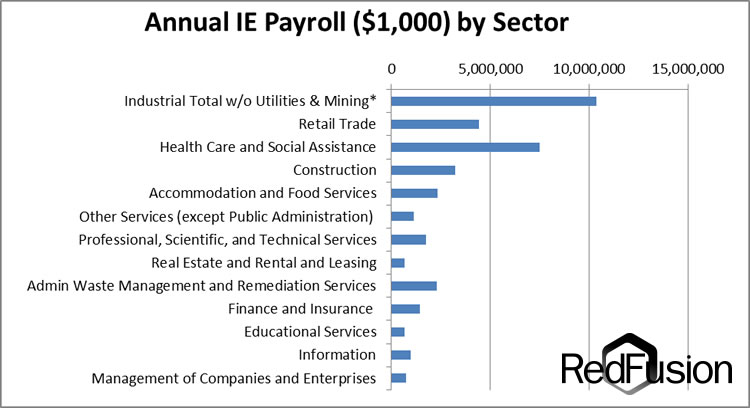 While California business policies distract any migration of manufacturing to the state, the Inland Empire is attractive within the regional area (LA and Orange Counties) due to lower land prices, wages and availability of more affordable housing. But natural growth in these regional manufacturers can create higher paying jobs to the area, as well and home grown manufacturing where the business is started right here at home.

One growth sector has been the transportation industry (within the industrial sector) due to increasing imports and exports to the Pacific Rim trading partners. Again land prices attract warehouse construction and space to park big rigs. Unfortunately these highly automated businesses don’t require much labor, and simply use up precious land where factories might have been built, and but do provide tax revenue to governments.

President Trump’s emphasis on manufacturing should be helpful for manufacturing overall, but it is too early to know how it may help us in the Inland Empire. Hopefully some barriers to exports will be removed so that our smaller manufacturers can more easily sell to foreign countries.

The Inland Empire labor force is still facing higher unemployment than the country as a whole, and the high growth years where construction was a major employer have not returned yet. But new emphasis on training for the high skilled trades provides easy access to that labor force. Community Colleges, and the new INTECH Industrial Learning Center have grown programming for the changes in advanced (automated) manufacturing. NORCO College, for instance, has non-degree training programs in Industrial Automation, electrical and engineering trades.

These kinds of programs, available labor, and over twenty colleges and universities throughout the Inland Empire, provide complete programs from training through PhD programs for high school students and workers who want to advance their skills.

The Inland Empire will probably never be a “Silicon Valley,” but it is clearly positioned to continue its strong industrial sector. If Trump is successful in helping us make things again, the IE will be here to help.