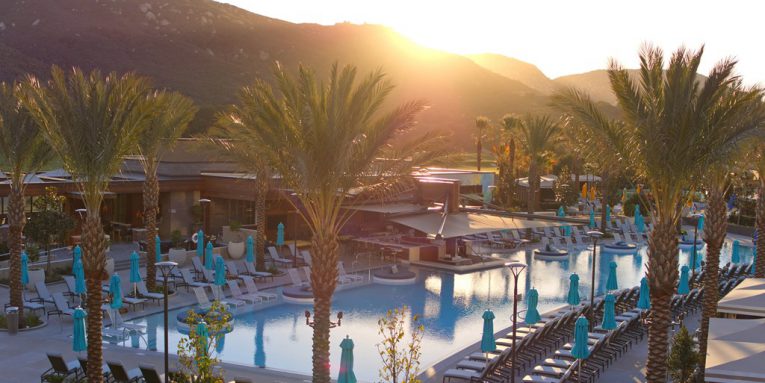 Temecula, CA – Lifescapes International, the landscape architectural firm has recently completed a landscape design for the $300 million expansion of the Pechanga Resort Casino, which makes it the largest Four-Diamond casino resort on the west coast.

The project, which doubled the size of the resort by adding an additional 568 rooms and suites, includes the addition of five pools, a poolside dining area and swim-up bar, family pool with slide and beach entry, four whirlpool spas (one with a natural rock waterfall feature), a two-story standalone luxury spa, two new restaurants, and a green roof garden and Zen space that features native plant species, private patios, and Native American art installations atop a new 40,000 square-foot ballroom.

“This project is thoughtfully designed, and will serve as a beautiful homage to the culture and history of the Pechanga Band of Luiseño Indians, who have inhabited the Temecula Valley for thousands of years,” explains Al Amador, Senior Principal and Project Designer at Lifescapes International. “Incorporating this rich history was a priority in our design process, and delivered a depth of inspiration that connects the design to the local community.”

For example, during the expansion, Lifescapes realized that several existing oak trees, with up to 60’ wide canopies, had to be moved to accommodate several elements of the design.  The trees, however, are sacred to the Pechanga people.

“We immediately went to the leaders of the community to discuss and determine a solution that would preserve the sanctity of these existing trees,” explains Amador. “Ultimately, we relocated each tree, carefully placing them throughout the grounds to deliver respect and honor to the Pechanga community.”

Lifescapes relocated 18 large specimen trees in total, and also installed an additional 10,260 trees and shrubs, while integrating sustainable plant materials throughout the property.

“Sustainability is always a focus in our designs,” says Amador. “Pechanga is situated in a region with intense heat and direct sunlight, making the infusion of drought-tolerant plants crucial to the success of this design. We have created a careful balance between drought-tolerant and lush garden elements, resulting in an energy-efficient, healthy landscape that guests can enjoy regardless of local weather conditions.”

Pechanga Resort Casino officially broke ground on its expansion in December 2015; the new hotel tower opened in Dec 2017, and the pool complex opened March of 2018.

Delawie served as the architect for the expansion, with Tutor Perini as General Contractor.

Lifescapes International is an internationally recognized landscape architectural firm that has become an influential force in the industry through its design of innovative, creative, and trendsetting landscape environments.  For nearly 60 years, the company has remained true to its mantra: “We Create Gardens People Love.” SM

Recognized as trendsetters designing resorts and hotels, casinos, multifamily and retail/mixed use projects, Lifescapes has designed notable projects including hotels Fontainebleau Miami Beach, Margaritaville Hollywood Beach Resort, The Mirage, Bellagio, and Red Rock Resort & Spa, as well as retail projects The Grove, Rockefeller Center Channel Gardens, and The Village at Meridian, among many others.  Additional information on the firm is available at www.lifescapesintl.com.