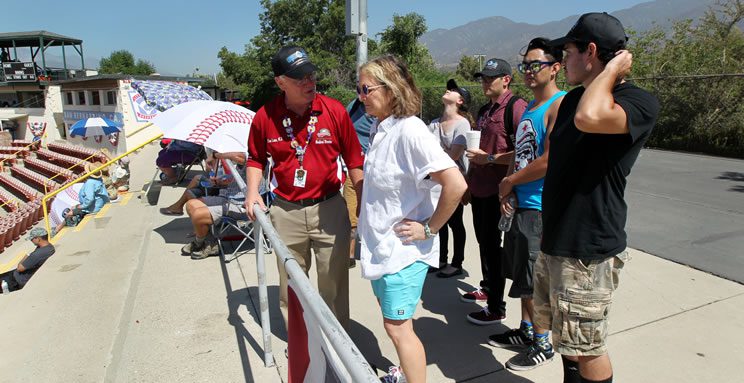 Lacey Kendall, center in white, the driving force behind Coyote Radio and its “My Awesome Empire” show, on location in 2016 with some of the Coyote Radio crew at Little League Baseball’s Al Houghton Stadium in San Bernardino. Photo: Corinne McCurdy/CSUSB

San Bernardino, CA – Lacey Kendall, longtime radio personality and the driving force behind Cal State San Bernardino’s Coyote Radio and one of its signature shows, “My Awesome Empire,” which officially ended its sixth and final season in late February, was recently interviewed by KVCR’s Lillian Vasquez on the program “Lifestyles.”

For Kendall, who received her master’s in communication studies from CSUSB in 2010, radio is a combination of everything she is interested in, including journalism and electronics. But as a student at San Bernardino Valley College, she initially rejected her counselor’s suggestion of exploring the radio and television industry.

“I’m not going to like that,” she had originally thought. “And here I am 30 years later. It was anything but lame; it was super awesome. I just love radio.”

After establishing her passion for radio, she volunteered at KVCR, a service of the San Bernardino Community College District, until she was hired on as staff. She was originally a board operator, but then moved on to “Bluegrass Alive” with host Uncle Bill Eason, which was her first paid job as “Cousin Lacey Kendall.”

Over the years, Kendall worked at various stations and had the chance to interview several noteworthy people, including G. Gordon Liddy, the former FBI agent known for helping plan the Watergate break-in; Arnold Schwarzenegger, Austrian-American actor and former governor of California; and Betty Eadie, best-selling author.

Kendall’s experiences interviewing an array of interesting public figures inspired her to help her CSUSB radio students launch “My Awesome Empire.” “I wanted students to get the reward that comes with talking to people and kind of finding out what they’re all about and what inspires them,” she said.

Her role as the broadcast and media consultant for Coyote Radio and the media department at CSUSB also motivated her with helping start the show. “My job was to come up with innovative things that students can get involved in that give them real meaningful experiences that will actually get them internships and real, live, career-level positions.”

“My Awesome Empire,” a 30-minute, multi award-winning program that shares the stories of heroic and innovative people, businesses, and children in the inland region of Southern California, launched in 2012. It was made by

CSUSB undergraduate and graduate students from a variety of disciplines.

“It served so many purposes,” Kendall said. “We had students that were involved in business and marketing and advertising, and they literally went out, hit the pavement, and found businesses in the Inland Empire that wanted to be a part of such a show.”

Now that “My Awesome Empire” has come to an end, Kendall will be working three days a week at the CSUSB Palm Desert Campus, where she will “work a little bit less, play a little bit more” as an instructor for digital production and broadcast operations as well as the broadcast and media consultant for a special assignment. But she doesn’t see “My Awesome Empire” as completely finished.

“What I want to see is somebody that comes in and either picks that ball up and runs with it, or comes up with something where we’re producing great content for you in something similar.”

California State University, San Bernardino is a preeminent center of intellectual and cultural activity in Inland Southern California. Opened in 1965 and set at the foothills of the beautiful San Bernardino Mountains, the university serves more than 20,000 students each year and graduates about 4,000 students annually. The university offers more than 70 traditional baccalaureate and master’s degree programs, education credential and certificate programs, and a doctorate program in educational leadership.